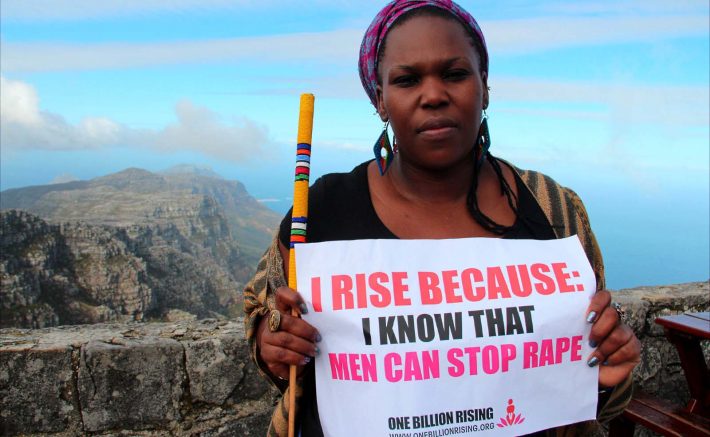 Two narratives about rape, utterly opposed to each other, currently circulate in South Africa.

The first, expressed most recently in President Cyril Ramaphosa’s speeches, paints a picture of a country at war with its women, with the highest rape numbers in the world. The second, shown in police statistics, tells the story of an epidemic of sexual violence brought steadily under control.

Both these versions of the present are alive with the ghosts of politics past.

Seventies estimate that only 5% of rapes reported

We can date the start of the first story to 1977, when a member of parliament estimated1 that just 5% of rapes were reported. He called for a judicial commission of inquiry into all aspects of rape.

A dazzling array of numbers appeared, all supposedly revealing the true extent of rape. By 1981 media reports were describing South Africa as having the highest rate of rape in the world. Reflecting on these increases another member of parliament speculated2 that rape “was a new form of terrorism.”

The numbers had an impact. In 1982 the minister of justice asked the South African Law Commission to investigate the law applicable to rape.

But where had these estimates of under-reporting of rape come from?

No national studies had been done to quantify the number of unreported rapes in South Africa. But research and interviews3 from the period suggest that the source of the figure was US researcher Menachim Amir’s highly influential 1971 study Forcible Rape.

A section of the book cited prior studies of under-reporting, with the figure of 5% derived from research probably undertaken in the US before 1960. Nonetheless, the claim that only one in 20 rapes was reported in South Africa became a solid, local fact.

By 1990, with political violence escalating, this foreign estimate was informing the sort of speculation offered by Jacklyn Cock in her preface to Lloyd Vogelman’s book The Sexual Face of Violence: “If war is defined by the scale and intensity of political violence, then perhaps there is a hidden war being waged against women in our society… sources estimate that over one thousand women are raped daily in South Africa. This would suggest that almost two million women have been raped here since 1984.”

The figures were also recalculated to argue that a rape occurred every 83 seconds, or every 23 seconds (a statistic that continues to be cited). These claims were made more salient by the transition to democracy and the need to ensure that rape was placed high on any new government’s political agenda.

South Africa’s status as the “rape capital of the world” was cemented by a 1995 Human Rights Watch and a 1996 Interpol report. The police fanned the flames further by estimating the number of reported rapes to be only one in 36.

Rape, it was said, had reached “epidemic” proportions. At a time when the country was undergoing both a political transition and an emerging HIV epidemic, the argument resonated. Widespread sexual violence not only explained women’s disproportionate rates of infection but also supported demands that the government make post-exposure prophylaxis available to prevent HIV-infection in rape survivors.

The number of rapes recorded by the police in the 1990s increased significantly. But this upward trend predates the decade.

According to one researcher, reports of rape increased by 132% between 1955 and 19904 – an increase that would likely have been greater had the Bantustans’ figures been taken into account.

From 1976 – when the first so-called “self-governing territory” was established – to 1993, the police excluded figures for the Bantustans from their crime reports. The reincorporation of the territories into South Africa in 1994 is part of the explanation for some of the recorded increases in rape in the mid-nineties.

Research institutions were also trying to understand the extent of violence in the country, with the 1998 South African Demographic and Health Survey finally providing a more reliable indicator of the prevalence of rape in South Africa. The researchers found 7% of their sample had been persuaded or forced to have sex against their will in the course of their lifetimes. Of the women who reported being physically forced to have sex, 15% said they had reported the incident to the police. (This is often reported as one in nine, but is more accurately calculated as one in seven.)

This difference was likely because Statistics South Africa used population figures for both men and women – even though the legal definition of rape at the time only applied to women. This meant prevalence rates for rape could logically only be calculated in relation to the female population. This use of total population figures may also explain why the SAPS prevalence estimate for rape in 1997 – 212 per 100,000 women – is also higher than Statistics South Africa’s estimate.

Data indicates a reduction in rape

The figures appeared at a time when it was imperative to show the police and government had crime under control.

In July 2000 a moratorium was declared on the release of the crime statistics to allow the police to revise their crime information systems. In January 2004 the police were set the goal of reducing contact crimes such as rape by 7% to 10% a year.

But these figures warrant a closer look.

The Sexual Offences and Related Matters Amendment Act, introduced at the end of 2007, widened the definition of rape to include an array of penetrative offences. It also recognised that that men and women could be both the perpetrators and victims of this crime.

The crime of “sexual assault” was introduced, largely referring to unwanted touching of the genital area, buttocks and breasts, as well as non-consensual kissing.  Other crimes were codified, such as grooming, making and/or distributing child pornography and all aspects of child prostitution.

The changes should, in theory, have led to an increase in reported sexual offences from 2008/09 onward. New crimes now existed and some existing crimes had had their definitions expanded. This did not happen.

The notion of a war on women in South Africa persists, despite the decline in reports. Following the #TotalShutdown marches, Ramaphosa called for an end to this war in his Women’s Day speech on 9 August 2018.

Another old theme reappeared in his speech at the presidential summit on gender-based violence in November 2018. This was that South Africa had the highest rate of rape in the world.

Why, despite some fluctuations, do the figures appear to have gone down? How did the police – or anyone else for that matter – achieve this drop? Does the decline reflect a reduction in the rate of reporting, an actual decrease in the prevalence of rape, or some combination of the two?

Fresh questions about rape statistics are long overdue if we want to meaningfully address the serious problem of rape in South Africa.