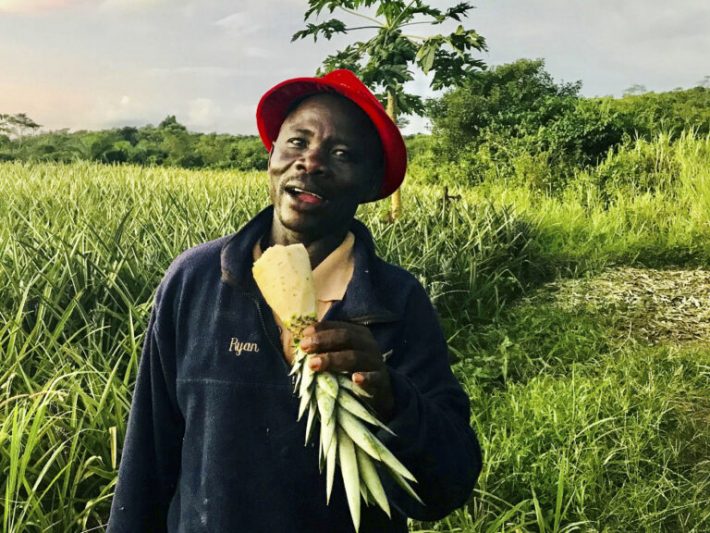 Albert Heijn is the largest supermarket chain in the Netherlands. In the fruit and vegetable section of many of its stores was, until recently, a poster of “Kwabena”, a Ghanaian pineapple farmer. It reads. “Doubly nice: Our fruit not only tastes nice, it also gives you a nice feeling. That’s because our growers, together with the AH Foundation, contribute to better living conditions for the local community.”

The message is clear: buy a plastic container of fresh fruit and do your bit to make the world a better place.

But what do these “better living conditions” look like? And what does “Kwabena” think of his image being used to sell pineapples in the Netherlands? The only way to find out was to ask him.

The search began in the hilly, fertile landscape in and around the duty-free zone in Nsawam, a town thirty kilometres north of Ghana’s capital Accra. The town hosts the factory and local headquarters of Blue Skies, a British multinational which supplies fruit and vegetables to supermarkets in Europe – including Albert Heijn. Worldwide, the company has factories in six countries (including one in Balfour in South Africa’s Mpumalanga province).

Blue Skies is owned by the entrepreneur Anthony Pile, and counts singer and self-proclaimed philanthropist Bob Geldof among its investors. It enjoys a good reputation in the development sector. By having fruits peeled, cut and packaged locally, it creates employment and adds value to the local economy: the price per kilo for fresh fruit chunks is considerably higher than for whole fruits. In Ghana, Blue Skies employs more than 1 000 people – on permanent and temporary contracts – and hundreds of day labourers.This makes them a major employer in this area. They also buy much of the pineapples, papayas, bananas, mangos and coconuts sold by local farmers. One such farmer, Daniel Djan in the village of Fotobi, thought he recognised Kwabena’s photograph. “That’s Attakra,” he says firmly. “He lives nearby.”

But before traveling any further, we visited some of the charitable projects supported by Albert Heijn, Blue Skies and other European supermarkets (last year, Albert Heijn contributed 58 000 euros to projects in Ghana, which equals the weekly turnover of a small Dutch supermarket).