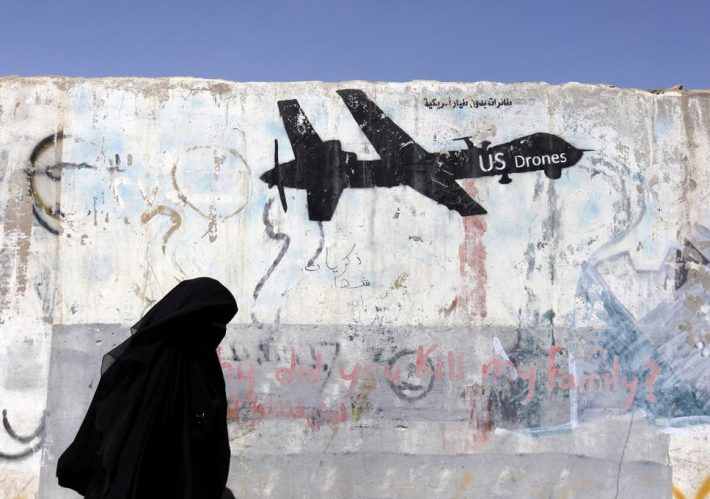 In the first four months of this year, U.S. Africa Command has conducted more airstrikes in Somalia than it did during all of Barack Obama’s eight years in office. The massive escalation of America’s undeclared war in Somalia comes as U.N. Secretary-General António Guterres has repeatedly appealed for a global ceasefire amid the Covid-19 pandemic. “There should be only one fight in our world today, our shared battle against Covid-19,” he reiterated on April 3. “We must mobilize every ounce of energy to defeat it.”

That same day, AFRICOM conducted an “airstrike targeting al-Shabaab terrorists in the vicinity of Bush Madina, Somalia,” according to a command press release. The U.S. claimed five members of al-Shabab were killed in the strike. Since the beginning of the year, AFRICOM has announced 39 airstrikes in Somalia. The command announced a total of 36 such attacks from 2009 to 2017, under Obama, peaking in 2016 with 19 declared airstrikes. Last year, under President Donald Trump, the U.S. conducted 63 air attacks in Somalia, the most ever in a single year.

“It’s our command’s responsibility to support our partners so this terrorist group can’t expand and strike the U.S. homeland as its leaders desire to do,” said U.S. Marine Corps Brig. Gen. Bradford J. Gering, AFRICOM’s deputy director of operations, after the April 3 strike on al-Shabab targets, which was followed by attacks on April 5, 6, 9, and 10. AFRICOM did not respond to a request for further information about the uptick in strikes in time for publication.

“The high tempo of U.S. air and ground operations in Somalia appears to be focused on supporting efforts by Somali government forces and its [African Union Mission in Somalia] allies to dislodge the terror group from its strongholds,” said Chris Woods, the director of Airwars, a U.K.-based airstrike monitoring group. “There are also a significant number of strikes targeting leadership within the terror group.”

The spike in U.S. airstrikes comes as the number of Covid-19 cases in Somalia is similarly rising. On April 8, there were 21 confirmed cases of the novel coronavirus in Somalia. As of Wednesday, there were 286. Most of those infected have no history of travel abroad, indicating local transmission of the disease and worrying prospects for the future — especially among the many internally displaced persons, or IDPs, who have lost their homes to the ongoing conflict between al-Shabab and the Federal Government of Somalia, which is backed by the United States.

“There is an increased risk that cases may go undetected or undiagnosed if community transmission begins and becomes widespread,” reads an April 20 report from the U.N. Office for the Coordination of Humanitarian Affairs. “The impact on the 2.6 million IDPs living in more than 2,000 crowded settlements with limited access to health and water, sanitation and hygiene services would be catastrophic.”

While reports have been circulating about potential U.S. military drawdowns and even base closures in Africa, the number of U.S. outposts in Somalia is significant and poised to expand. There are five U.S. bases in Somalia — the second-most on the continent after Niger — according to formerly secret 2019 AFRICOM planning documents revealed by The Intercept earlier this year. Last September, one of those bases — a U.S. outpost at Baledogle — was attacked by al-Shabab. And in January, the terror group assaulted the U.S. base at Manda Bay, Kenya, killing one American service member and two U.S. contractors.

Chris Woods of Airwars drew attention to the fact that AFRICOM’s widely dispersed footprint of scattered outposts left smaller sites like Manda Bay vulnerable. “While we may see drawdowns in some African nations, in others it’s just as likely that we’ll see bases consolidated and beefed up,” he told The Intercept.

In fact, the number of U.S. personnel in Somalia remains high, despite the global pandemic and talk of drawdowns. Last month, the New York Times reported there were roughly 500 American troops based in the country. But the total number of Defense Department personnel, “depending on training missions, operations and other security force assistance activities,” fluctuates between 650 and 800, according to AFRICOM spokesperson John Manley.

Despite support for a universal armistice from dozens of countries, including U.S. allies such as the United Kingdom, France, and Germany, as well as human rights groups, the Trump administration has refused to be bound by the call for an end to fighting. A White House official referred The Intercept to a State Department comment to Foreign Policy magazine: “The United States supports the secretary-general’s call for a global ceasefire, but have noted that we will continue to fulfill our legitimate counter-terrorism mission.”

While there have been significant declines in fighting in some conflicts, Woods noted, including a pause in Russian airstrikes in northern Syria since early March, other war zones have seen a marked uptick in violence.

“In Somalia, we’ve seen no letup at all in U.S. actions against al Shabaab, which are presently running at their highest-ever tempo,” he told The Intercept. “It’s deeply troubling that more belligerents are not heeding the UN’s call for ceasefires during this global health crisis.”