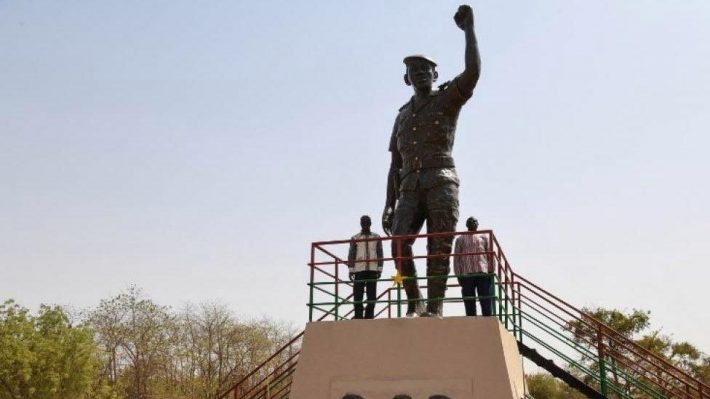 This year’s African Film Festival, an annual event that takes place in Ougoudugo, Burkina Faso, will be remembered as a historic occasion. A day marked to evoke a nation’s memory of a homegrown hero – the “Upright Man”. On March 1, 2019, on the sidelines of the festival the statue of Thomas Sankara was inaugurated.

The statue – bronze and 5 meters high – was built “on the initiate of the international Memorial Committee at the headquarters of the National Council of the Revolution, where President Sankara was killed”.

A homegrown hero, an “iconic figure of the revolution”, profound Pan-Africanist, anti-imperialist and anti-corruption crusader, Thomas Sankara was assassinated in 1987 after becoming president in 1983 at age 33.

In the four years he was president, he demonstrated repeatedly that “initiatives that once were unimaginable could at least be set into motion”. One of Africa’s greatest orators, he was profoundly able to reach audiences with charisma, “colorful and inventive turns of phrase, sharp wit and clear intelligence”.

He led “one of the most ambitious programs of sweeping reforms ever seen in Africa” through an objective he declared “democratic and popular revolution”. The mission, packed with extensive goals and impressive visions it was primarily concerned with “the tasks of eradicating corruption, fighting environmental degradation, empowering women, and increasing access to education and health care, with the larger goal of liquidating imperial domination”. It sought to mainly reverse the structural social inequities inherited from the French colonial order.

As part of the revolutionary effort that was unfolding in Burkina Faso, Sankara is noted for his “deep involvement” in the Pan-African Film and Television in Ouagadougou (FESPACO). During his presidency, amid the “revolutionary era, many citizens acquired a strong sense of pride in their African identity and in the cultural richness of their country”.

It is no surprise that a quarter century after his assassination Sankara still stirs excitements and remains a notable political presence in his country. “Each 15 October, on the anniversary of the 1987 coup that brought his death, admirers rally by his grave in Ouagadougou to commemorate their fallen hero. Sometimes the gatherings are relatively modest, almost ritual ceremonies. Sometimes, however, they have drawn tens of thousands and turned into exuberant protests against the regime of President Blaise Compaore´, the former captain who seized power in 1987”.

To further the legacy of Sankara as well as serve as the revival of the collective memory, it only makes sense that a statue (long overdue) of the “Upright Man” is erected in the “land of Upright People” (meaning of Burkina Faso given by Sankara on the first anniversary of his presidency). This commemoration and the heritage site will keep Sankara’s legacy alive and remind coming generations, in Burkina Faso, throughout Africa and the world over, to honor the memory of the revolutionary hero who fought for the freedom and independence of his country.