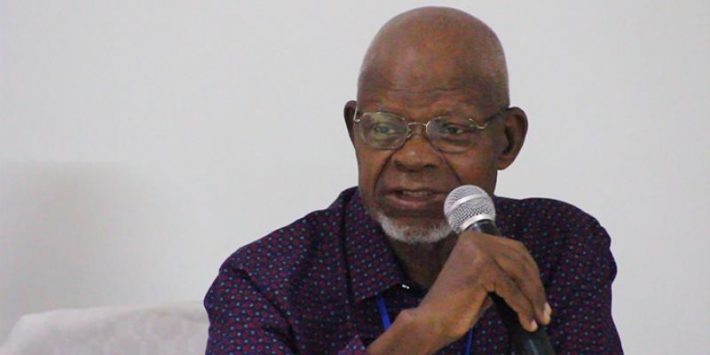 In the early hours of July 15, 2020, at the University Hospital in Kinshasa, a brother, comrade, philosopher, historian, thinker, healer, and dreamer left us physically. But like a star in the firmament, he is still there to help us navigate through the current and future times, assuming we understand what he had been trying to accomplish in his life, and how he understood the senselessness of the managers of a dominant system that presumes it must control and own everything.

From wherever he is, Professor Ernest Wamba dia Wamba would have welcomed the launching of SENS, on August 3, 2020, in Burkina Faso, a movement aimed at “servir et non se servir,” which translates as “to serve and not to help oneself.” This is counter to the practice of so-called leaders in many African countries, where the state has become the trough. Is it possible to put an end to these kinds of situations? That is one of the questions that dominated Professor Ernest Wamba dia Wamba’s life.

In his approach to the most urgent problems, Professor Ernest Wamba dia Wamba always thought and acted as if he were everywhere, seeing things from all possible sides, while being grounded within his native culture of Congo. He knew how to listen with intensity.

In July 2019, he had to go to the Democratic Republic of the Congo to renew his passport, letting it be known that he would be back home, in Dar es Salaam, within a month or so. In hindsight, it is not difficult for anyone who has known him to understand that being close to where he was born, and where he grew up, he would take the opportunity to re-visit his birth place, Sundi-Lutete. The political and economic conditions in the DRC are well known even to people outside of the country. It is one of the richest countries on the planet in terms of natural and human resources. Yet, it is also one of the countries with so-called leaders whose single-minded self-interest has been to accumulate wealth, ensuring that the majority of the population remains poor.