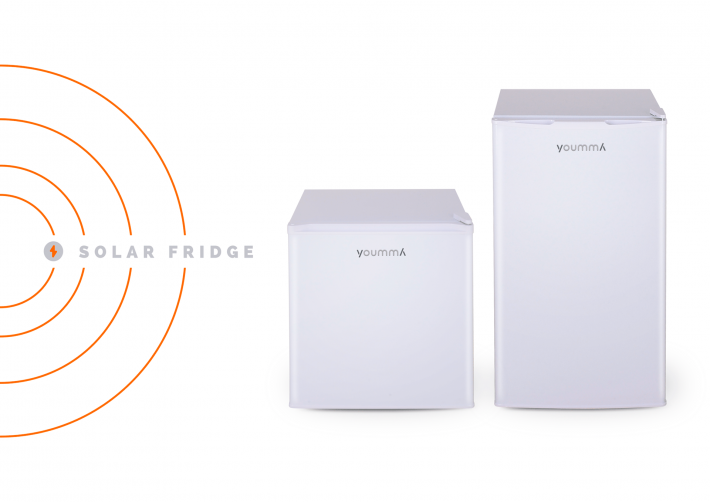 In the scorching climate of sub-Saharan Africa, it’s nearly impossible to keep food or milk fresh without a refrigerator. Unfortunately, a fridge isn’t even an option in a region where roughly 600 million people live off the grid.

In some Asian countries, such as Thailand, people who can’t afford a fridge use a cooler as a refrigerator instead, but they have to refill it with ice daily. That means there still needs to be electricity somewhere nearby for the ice factory to produce ice.

According to Nidec Global Appliance, which owns Youmma, the cooling system of the 100-liter fridge consumes 25% of the energy of a standard fridge. It was designed specifically for off-grid use, which means it can be powered by a smaller solar panel with a smaller battery, cutting down on costs. Even without sunlight, the battery can keep the fridge running for a day and a half.

Around 2,000 fridges had been sold since Youmma’s launching in 2019, 80% were to small business owners. Customers don’t have to stress about paying the total cost of the fridge upfront. They get to pay in daily installments via cell phones, through a Kenyan solar energy company called M-Kopa, for a package that covers the installation of a rooftop solar panel and includes solar lighting.

Daily payments go from $1 to $1.50, and it usually takes around two years until it’s finally paid off; but, once it is, the customer owns the fridge and the solar power system wholly. If a customer doesn’t pay, the refrigerator stops working altogether, until they do. It may cost more than a conventional fridge, but that’s because it includes lighting and an endless supply of free off-the-grid energy.

However, solar fridges are still expensive for the average person, even with pay-as-you-go systems available, and that’s why small businesses are the main buyers. “Pay-as-you-go is useful for [rural] households or businesses with an uneven cash flow, such as income-based on harvesting seasons,” says climate change and energy specialist Teresa Le, of the UN Development Program.

One small shop owner in the village of Kithungo, in eastern Kenya, is delighted with the outcome of his Youmma fridge. Kioko Mwange sells milk at his shop, and since he got the refrigerator, his milk has improved in quality, and sales have increased, which offset the daily payments.

Mwange said: “It helps me preserve milk for up to 10 days. I have seen an increase in customers, and they are now confident about the quality of the milk I sell them”

There are a few other affordable options for solar-powered refrigeration in sub-Saharan Africa, but not many. These also tend to be shared fridges, such as Kenya’s Solar Freeze and Nigeria’s Cold Hubs, used to store produce at food markets or after harvest. Regardless, the demand for solar fridges can grow as distribution networks and pay-as-you-go schemes improve.

André Morriesen, Nidec’s research and development manager, believes the fridges can be a “life-changing product” for rural communities. He added that it could also “bring freedom to women” who have to spend hours each day walking to food markets. A refrigerator would be a game-changer because they can bulk buy ingredients, saving them money and time.A solar-powered fridge isn’t only useful for those living off the grid, but also for people who are taking strides towards a greener future. Around 99.5% of American homes have a fridge; if they switched to solar, it would drastically reduce carbon emissions.