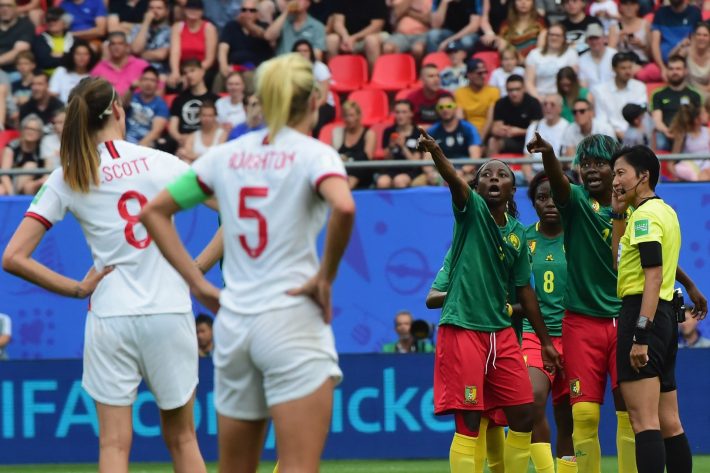 This Women’s World Cup was a historic one for African football: For the first time ever, two African teams, Cameroon and Nigeria, advanced to the knockout rounds. South Africa also qualified for the tournament for the first time, but did not advance outside of the group stages.

However, as notable as this tournament has been for women’s football in Africa, it has also shone an ugly spotlight on the racist stereotypes that so many in the media cling to when discussing female football players from African countries, both on the field and off.

Both Nigeria and Cameroon lost in the Round of 16 over the weekend, to Germany and England, respectively. The commentary on both matches was redolent of exhausting colonialist cliché.

In Nigeria’s 3-0 loss to Germany on Saturday, Cat Whitehill of Fox Sports 1 quite explicitly said that Nigeria’s white, European head coach, Thomas Dennerby, had been able to tame the wild, raw athleticism on the team, and refine their skills with his benevolent discipline and knowledge.

“They haven’t put the time and effort into really helping this Nigerian side,” Whitehill said. “Somehow Nigeria keeps making it into the World Cup based on their athleticism and they’re finally with Dennerby getting a proper coach to teach them proper tactical and technical aspects to their game. I think it’s exciting for Nigeria and looking more like a side that can compete.”

Additionally, throughout the broadcast, Whitehill and her partner, Lisa Byington, repeatedly brought out the old “pace and power” trope to describe what Nigeria brought to the pitch. Not only is this notion rooted in racist stereotypes of black athletes, but it is also comedically lazy commentary considering the fact that an informed audience can witness the team’s tactics, timing, and precision in real time as the announcers simultaneously overlook it.

Grant Wahl of Sports Illustrated addressed this in his daily video essay from Paris on Saturday night.

“It’s not that black players aren’t fast or strong, it’s just that there’s so much more to their games, and that’s apparent to anyone who watches them, anyone who does research on them. You can’t just be fast and strong to succeed in the sport of soccer,” Wahl said.

But, England won to advance to the quarterfinals, where they’ll face Norway. Instead of celebrating, though, England head coach Phil Neville and seemingly every member of English media decided to express their sheer horror at the behavior of the Cameroon women.

“I am completely and utterly ashamed of the opposition,” Neville said immediately after the match.

“It was a good win but that wasn’t a World Cup last-16 tie in terms of behavior that I want to see from footballers. This is going out worldwide. I didn’t enjoy it, the players didn’t enjoy it. My players kept their concentration fantastically, but those images are going out worldwide about how to act, the young girls playing all over the world that are seeing that behavior. For me, it’s not right.”

Neville was not alone in acting like what the Cameroon women did might actually ruin women’s football forever, and in painting the English women as the victims, merely damsels in distress. Luke Edwards of The Telegraph literally wrote an article entitled, “The Cameroon team’s disgraceful VAR protests have damaged the reputation of women’s football.”

And, of course, the British tabloids opted not to use this England victory as a chance to celebrate women’s sport. Instead, it used it to shame the Cameroonians.

Look, there are plenty of things to be horrified and disgraced by at this World Cup: The fact that FIFA is using the Women’s World Cup as a test-run for new rules and VAR; the prize money gap between the men’s and women’s World Cup; the inequality between European nations, the United States, and Canada, and those in the Global South; the fact that Nigeria’s team had to hold a sit-in when it arrived back home in order to demand wages it was owed by the federation; the fact that even the best women’s soccer in the world is still having to sue its federation for equal pay.

All of those items deserve a tabloid cover with the headline, “Shame.” Instead, that is reserved for African players.

Of course, Cameroon deserves to be criticized for its unsportsmanlike actions on the field. But that criticism should come with context. The team was under immense pressure to make it to at least the quarterfinals this year, after making it to the Round of 16 back in 2015. Most of its players do not earn a living wage playing soccer, and the facilities and treatment provided by the Cameroonian federation are insulting at best. Given their inexperience and lack of playing and practice time together, it makes sense that adding something like VAR into the mix — and in such a haphazard way, thanks to FIFA’s lack of care about women’s football — rattled them more than it did other teams. Overmatched and underfunded teams are often criticized when they have an “I’m-just-happy-to-be-here” attitude; clearly, Cameroon was there to compete and win.

But the media doesn’t give black female soccer players, particularly those who play for African countries, the benefit of the doubt, the validity of their emotions, or the privilege of nuance. Instead, people keep painting them as caricatures, capable of destroying the game with their pace, power, and anger.

Female footballers throughout Africa are fighting tooth and nail for a better future for their sport. As they continue to make advancement, it’s well past time for the media to leave the stereotypes in the past.