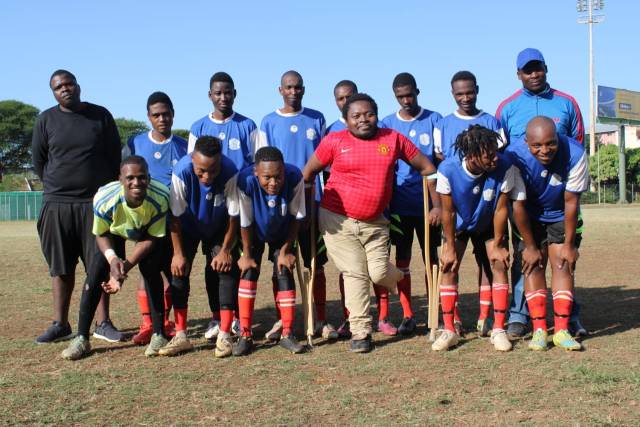 “I realised these kids are not bad they just need guidance and a father figure. I had to introduce sports to them” says Siyabonga Ngcaweni known as “Coach” in Pantus Hill community, an informal settlement located in Ethekwini Metropolitan Municipality, KwaZulu-Natal, South Africa.

35-year-old Ngcaweni is from Umzimkhulu but practically grew up in Pantus Hill. He was raised by both parents, until his father was shot dead in 2002. Coach was born differently abled and attended Open Air, a boarding school that provides education to children with special educational needs. This is where his love for sports started. He played pool and table tennis.

Ngcaweni studied computer studies at Durban University of Technology in 2004 and also studied Digitising and video editing at the National Electronic Media Institute of South Africa known as NEMISA in 2006. And is currently working as an information officer for the Department of Health Ethekwini District office. Ngcaweni has worked hard for his name “Coach” as the founder of the Social League for pool tournament in Pantus Hill founded in 2011 and also as the co-founder of four soccer teams in Pantus Hill.

He says back in the day “Pantus Hill was a rough place for everyone” his study showed that the high crime rate was caused by a high population of working single mothers, lack of good role models and lack of sports in the community. That inspired him to form a pool team, recruiting young people to join the team. That way he was keeping them out of the streets. He says, “I wanted to make that impact of changing the upbringing of the kids in Pantus Hill through Sports”. Coach has opened his home to these kids, even his WIFI router so that they are able to have access to the internet for school related projects. This way he is able to keep an eye on them during weekdays while they are studying.” It is a huge responsibility but I enjoy every moment of it” he said.

Over the past nine years Coach Siyabonga has mentored and life coached over 374 boys, however he still struggles with some of the parents who lament that he is coaching a “tavern sport.” He says he understands the fact that in black communities you usually find pool in taverns and shebeens. With soccer he says it demands a lot of cash flow especially when transporting the boys and the registration fee for Durban Central SAFA local football association. Coach says he wishes that his pool team makes it to the provincial competition so that they can receive KZN colours then they will qualify for nationals and for his soccer teams to grow.

Nosipho Majola (44) a community leader has been a resident in Pantus Hill for 19 years and says her mind is always at ease when her kids are going to play soccer because its safe for them to be participating in sports other than not knowing where they are. She is one amongst many parents who are concerned about their kids due to high rates of alcohol and drug abuse in their community. Majola sees the impact of having sports in the community and the change Coach Ngcaweni along with his partner Alex Ndovela have been making.