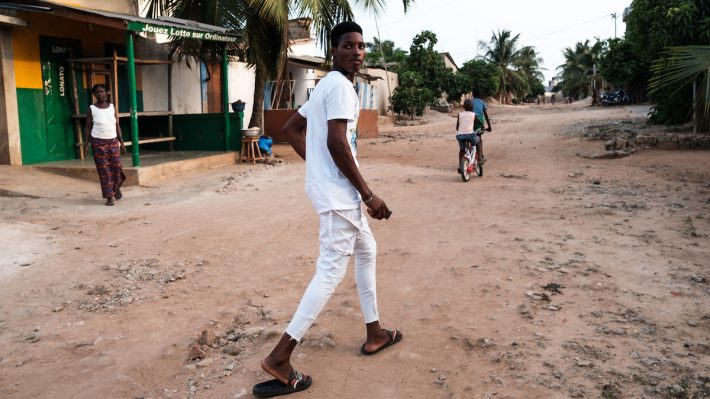 Ayao* is a tall and well-built 15-year-old, and like many his age, he is very particular about his appearance. He wears a white T-shirt with a colourful design on the front, white trousers and Kappa slip-on sandals. He likes to put a lot of effort into grooming his stylishly cut hair. When I meet him at his family’s simple one-storey brick house in Lomé, Togo’s capital, he stands in his room looking into a tiny mirror, wincing as the comb gets stuck. Ayao works for a company that sells drinking water. He gets up at five to load transport tricycles with heavy bags of water sachets, and then delivers them to shops in the local area. Before starting this morning, he took two white tramadol pills, each with a stated dose of 225 mg. For four years now, Ayao has been taking between 450 and 675 mg of tramadol almost every day. The maximum daily dose recommended by doctors is 400 mg.

“When I take it, I feel like I can do anything. Nothing seems impossible,” Ayao says. “If I do not take it, I am not strong. It does not feel good.” When he has taken the drug, he speaks so quickly that he stammers and trips over his words.

Tramadol is a synthetic opioid used to treat moderate to moderately severe pain. It’s relatively safe, cheap and widely available compared to other opioid painkillers, and is given to patients with cancer, after surgery or in cases of chronic pain. In Togo and many other countries, it’s listed as an essential medicine – one that the healthcare service should have available at all times to meet the population’s needs. It also has other effects. It can be a sedative, but if taken orally at high enough doses, it can produce a stimulating euphoric effect similar to heroin. Refugees in northern Nigeria reportedly use tramadol to deal with post-traumatic stress. In Gabon it has infiltrated schools under the name kobolo, leading to kids having seizures in class, while in Ghana the ‘tramadol dance’ is trending, basing its zombie-like moves on the way people behave when they’re high on the painkiller.

Musicians from Sierra Leone, Togo and Nigeria have written songs about it. It is popular in Mali, Niger and Burkina Faso. Among the ranks of Boko Haram and Islamic State, tramadol tablets are taken by fighters, leading them to be dubbed ‘jihadist pills’. But because it’s only about one-tenth the strength of morphine, tramadol is deemed to have a low abuse potential. It’s therefore not internationally controlled – or ‘scheduled’ – by the United Nations. Instead, each country has to set up its own rules and regulations for tramadol production, import, export, distribution and use. The efficacy of these is mixed. Across North Africa, West Africa and the Middle East, tramadol abuse is rife.

How many Nigerians are on prescription drugs?

Opioid use, drug-related disorders on the rise: UN report