Skip to content
Latest news
The dangers of NGO-isation of women’s rights in Africa
Greenlight Planet & Rural Ethiopia’s Energy Sector Transformation
Nigeria Is Not Rice Self-Sufficient Yet, Says Africa Rice Centre
Displacement and Dispossession in Tanzania: How “Conservation” is Destroying the Maasai
Access to and quality of education: How is Africa progressing?
Art & CultureCulture & LifeEditors Choice 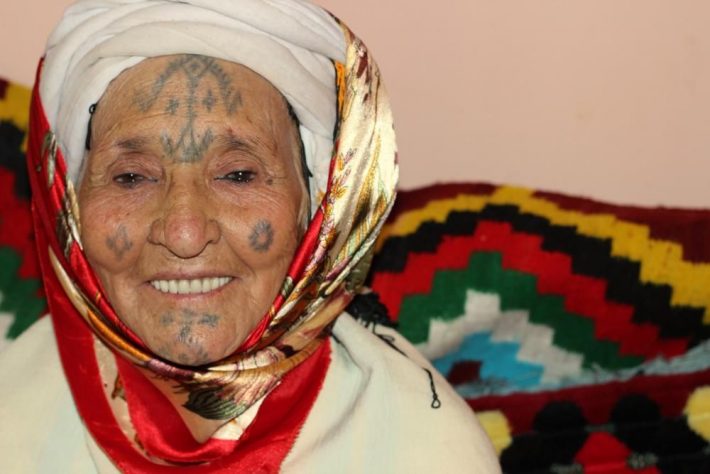 For Africa’s indigenous Amazighs, body art was more than mere images. They were a decisive social, almost poetic, marker for centuries.

For many a native North African, the shades of nostalgia take on specific form. Indeed, the weight of 3,000 years of history and tradition among the region’s Amazigh people was etched in form and feature, whether around the eyes, on the palms or forehead, as dark, diamond shapes on the nose or on virtually any part of the body, for centuries. Yet these were no ordinary drawings. The tattoos that have come to symbolize the past so potently oftentimes mirrored nature and reflected life and its forces, whether in the form of a flower or a fly, a spider or a snake. Far beyond being a means of beautification, they symbolized the collective memory and history of a people. And yet, a practice that embodied every facet of this pre-Arab culture slowly eroded with the passing of every generation of women that cultivated this fine art over the centuries. According to some sociologists, the tradition faded in the 1970s. Today, only a pocket of suburban villages still indulge in this practice.

‘Amazigh’ means “free people” in Touareg, a closely related variation of other Berber dialects that are spoken among tribes. Tamazight is the root language. The Amazigh people live in communities across Morocco, Algeria, Tunisia, Libya, Egypt, Mali, Niger, Mauritania and Burkina Faso. Abdelkebir Khatibi, a Moroccan philosopher, literary figure and Sorbonne-educated sociologist who wrote several books on the subject in the 1970s, said that tattoos were prevalent among Amazigh women because they served as a strong social marker. The drawings helped differentiate between tribes, as well as certain women’s marital status and fertility. “As well as being an adornment, the tattoos were unique insofar as they were a reflection of the marvels of the human body,” wrote Khatibi, whose works have been critiqued against the likes of Palestinian academic Edward Said or Algerian novelist Assia Djebar. “They are works of arts of differing intensity.”

The significance and scale of the drawings varied from tribe to tribe. While women sported obvious tattoos on their bodies and their faces in the early days, the tattoos got incrementally smaller and less noticeable over the years.

Mustafa Qaderi, a Moroccan anthropologist, blames the virtual extinction of the practice, which was far more widespread in villages than in cities, on urbanisation and its discontents.“In 1960s Morocco and Tunisia, for example, Arab politicians sought to eliminate cultural elements specific to indigenous customs,” Qaderi told TRT. Ironically, tattoos were strictly forbidden among the continent’s Christians and Jews but not among Amazigh Muslims. Despite this, the Islamist ideology that took over North Africa in the 1970s and 1980s led many older women to stop engaging in the practice on the premise that tampering with divine creation is an abomination, according to Qaderi.

The artists that etch those drawings onto their subjects were said to be in a league of their own. They are chosen according to artistic talent, speed and precision. But beyond the mechanical dimension, those women would be chosen for their mystical capabilities at breaking spells and curing disease. The tattoos, which are free of charge, are drawn with a needle containing kohl and coal ash. The wound is then cleaned with salt water and herbs. Tattoos are typically drawn around openings, such as eyes, nose, mouth, navel or the hands and feet.

Puberty and marriage were the decisive milestones that earned Amazigh women their tattoos. In fact, the Amazighs of the Rif mountains in Morocco would typically have their girls tattooed ahead of puberty to publicise that they were ready for marriage. According to Sarah Corbett, a writer specialising in ancient culture, the images chosen were symbolic of specific qualities. Where a tree would represent strength, snakes embody healing and bees symbolise stamina. Similarly, the two lines that are drawn on the chin represent the duality of good and evil. Moroccan sociologist Abderrahim El Atri considered the tattoos “motifs to rebuild the human body.”“They represent a belief that supernatural energy resides in all things,” El Atri told TRT.

“Women considered the tattoos their defining factor in that it made them stand out. Their permanence symbolized a sort of immortality that cannot be attained with removable make-up. It gave women a type of glitz and glamour that nevertheless did not obscure their real beauty and facial features like the cosmetic products of the modern era. It made them pretty without reducing them to consumeristic subjects vying for attention or validation.” In Algeria, tattoos were a vital form of self-expression or social status. For example, widowed women would get a tattoo between the ear and the chin. Facial tattoos, meanwhile, were seen as a protective omen against evil or illness. The latter was characterized by the “ahjam,” or “healing,” tattoo, which was inscribed with a knife.

Tattoos were by no means limited to women. In fact, men got tattoos too, though the shapes were smaller and more discreet. According to French anthropologists Tristan Riviere and Jacques Faublee, young men got drawings inscribed on their hands to enhance dexterity when playing musical instruments. Famous tattoos were drawn onto the sculptures of Libyan kings who ruled in Egypt. Qaderi says a handful of men in rural areas of Morocco still sport tattoos to this day to reinforce tribal belonging.

The tradition inevitably neared its end with the death of the community’s elders, whose demise symbolized a loss of identity given that the art on their bodies essentially told tales of the past. For Qaderi, the end of this form of art is a big loss for Amazigh culture “because tattoos were a simple, yet substantial, way of enhancing beauty.” “We have officially lost a large part of our aesthetic imagination,” he said. On his part, El Atri says that though body art throughout the continent is a form of self-expression, a way of solidifying tribal belonging and identity and a measure of spiritual wellness and social standing, “we have now other means of telling the world our stories.” El Atri also thinks that the death of the practice is part and parcel of social evolution. “With changes to arbitrary standards of beauty, we now have other ways of celebrating the human body,” he said. For Amazigh, tattooing is a language that reflects the tendency of the human spirit towards perfection and its quest for immortality. Unlike the modern globalization of cosmetic products that portray women only as customers, tattooing for Amazigh was a tradition that takes its tools from nature to beautify human bodies and highlight their true beauty.