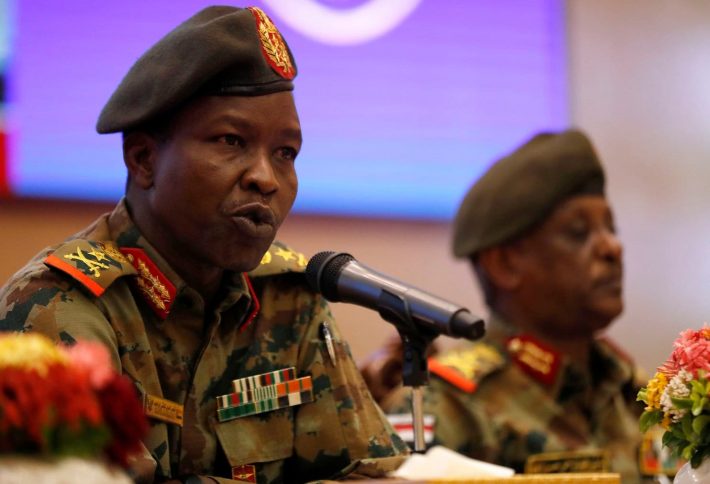 Sudan‘s military has rejected Ethiopia‘s proposal to end the political deadlock over the composition of the country’s transitional government.

The ruling Transitional Military Council (TMC) and the opposition coalition have been wrangling for weeks over what form Sudan’s transitional government should take after the military deposed long-time President Omar al-Bashir on April 11.

Ethiopia’s proposal, which the opposition coalition has agreed to, suggests that a ruling sovereign council would be made up of seven civilians and seven members of the military, with one additional seat reserved for an impartial individual, according to Reuters.

The TMC spokesman, Lieutenant General Shams al-Din Kabbashi, instead said on Sunday that he agreed in principle to the African Union (AU) plan.

“The African Union’s initiative came first,” said Kabbashi, adding that the council had not studied the Ethiopian initiative, which he described as unilateral.

Details of the AU proposal were not immediately known.

Kabbashi said that Ethiopia and the AU needed to unify their efforts to mediate between the council and the opposition coalition spearheading of months-long pro-democracy protests.

“We asked the mediators to unite their efforts and submit a joint paper as soon as possible to return the parties to negotiations,” Kabbashi said.

Jon Temin, the Africa Director at Freedom House, a non-governmental body, said the military appears to be stalling for time.

“I would characterise it as classic Sudanese delay tactics. And we have seen this before from previous regime trying to play mediators off against each other to buy time and have this sort of circular conversation and ultimately end up going nowhere,” he said.

Talks between the ruling generals and the Forces for Freedom and Change coalition collapsed when security forces stormed a protest sit-in outside the Defence Ministry on June 3, killing dozens.

The army later expressed “regret” over the “excesses” that happened on June 3.

The makeup of the sovereign council was the main outstanding sticking point between the two sides before the talks collapsed. The military council cancelled all agreements it had reached with the coalition after the sit-in’s dispersal.

Ethiopia and the AU have stepped up diplomatic efforts to resolve the crisis in Sudan which has been wracked by tensions between the protest leaders and generals.

An attempted coup in Ethiopia on Sunday has posed hurdles for Prime Minister Abiy Ahmed, who tried to mediate to resolve the deadlock.

“Certainly the prime minister [Abiy] has a lot on his plate given developments today and yesterday,” Temin told Al Jazeera from Arlington Virginia.

“I think Ethiopia probably is about as good among the regional countries a mediator one can hope for, but they do not have leverage on their own.

“They need the influence of Saudi Arabia and the UAE and probably the US to change the calculations of the military in particular. And it remains to be seen if those countries are going to engage in a more productive manner,” he said.

“Saudi and the UAE support the military government as well as Egypt.”

The two oil-rich Gulf countries between them pledged $3bn in financial and material support to Sudan in late April.

The ruling military council however has denied Saudi Arabia and the UAE have “dictated political or economic conditions” in the country.

Temin said that the US at least in its rhetoric has been “forceful” in support for a move towards “civilian rule”.

“But the question is whether the US is actually going to put actual muscle behind that.

“So far we have not seen much of it.”