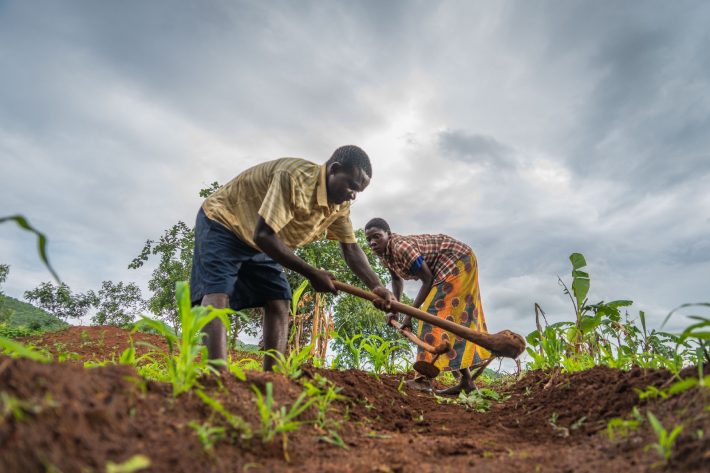 For nearly a week, Swalehe Nkwale saw unfamiliar surveyors place slabs on parts of Nyamitanga Division land 108 miles south of Dar es Salaam. Then one day, he saw a poster on his own farm declaring that he could no longer grow crops there. It was the start of a decade-long battle against British firm African Green Oil (AGO) and the Tanzanian government. They won that fight, but the Nyamitanga villagers didn’t stop once they got their land back in 2016.

They have since mapped their land and registered it with authorities, making it hard for any firm to take it from them in the future. And Nyamitanga isn’t alone.

Villages and communities across agrarian parts of Tanzania are now using legal expertise, political pressure and smart solutions like land mapping to win back plots — and then secure them — from corporations they accuse of using loopholes to grab territory. From their own government and foreign royals to companies and corrupt officials, these villagers are taking on powerful opponents, and in many cases, finding success.

In late September, Northern Tanzania’s semi-nomadic Maasai people won an injunction against the country’s government over its 2014 seizure of ancestral land for a 579-square-mile private game park earmarked exclusively for a Dubai royal family. The community sued in 2015, and it argued that the government had intimidated its witnesses. Award-winning Maasai pastoralist Edward Loure has helped the Maasai and Hadzabe — another indigenous community — secure communal land-use rights to 200,000 hectares since 2013, before which only individual land-use rights were granted. Villagers in Kapunga, in Tanzania’s southern highlands, publicly confronted the country’s land minister during a visit, reminding him of President John Magufuli’s 2015 promise that he would get them 1,875 hectares of their village land back from a rice farm. Adding political pressure worked. Since Magufuli needs the political support of poor farmers in the region’s steadiest democracy, ahead of elections in 2020, the community got their land back last year. And villagers in Nyamitanga are more secure now to ensure that nobody can steal their land.

“We are very careful never again to allow such dubious deals,” says Nkwale.

Globally, indigenous people and rural communities collectively hold more than half of the world’s land, but they legally own just 10 percent, and even less of it is registered and titled, according to a study published in July 2018 by the World Resources Institute (WRI). In sub-Saharan Africa, where competing governments have over the past decade invited foreign companies — from countries as disparate as Britain and Bangladesh — to invest in land to produce food and biofuels, that challenge is particularly acute.

“Companies … acting in bad faith may take shortcuts which do not respect the rights of communities,” says Laura Notess, a WRI research analyst.

In Tanzania, land is public property held by the president as trustee on behalf of the people. Its registration, however, is often a cumbersome process riddled with corruption and mismanagement, according to Transparency International. Though the law requires companies to obtain land through the Tanzania Investment Centre, an independent regulator, firms in some cases have tried to bribe local leaders to directly lease parcels of land.

“Evidence indicates that during the implementation of large-scale investments, the rights of rural communities over land and natural resources have not been respected,” says Emmanuel Sulle, a researcher at the Institute for Poverty, Land and Agrarian Studies in Cape Town.

The legal framework governing land is so riddled with holes that there’s often no express illegality needed for a dispute to arise. In Nyamitanga, for example, villagers had agreed to hand over 1,500 hectares of land to AGO. The firm, in return, was to build a school and a dispensary and fix a water-supply system, local residents said. But no contract was signed. It turns out, no contract was needed. Verbal approval was enough under the country’s village land law, and AGO took the land. The promises never materialized, and eventually, faced with protests and a project struggling to take off, AGO walked away. Asked, the company has denied any wrongdoing.

But finding ways around laws is no longer just the preserve of big companies in Tanzania. Traditionally, individual land-use rights are awarded through what are known as certificates of customary right of occupancy (CCROs). Loure, who has run a nonprofit called the Ujamaa Community Resource Team since 2003, helped forge partnerships between villagers and local authorities, eventually leading to the issuance of the first CCRO in 2013. Communal registration of land use for communities like the Maasai gives them collective strength and bargaining power in negotiations with any land seeker.

What has also helped Tanzanian farmers is the pro-poor and pro-farmer platform Magufuli came to power on in the 2015 presidential elections. He promised Kapunga villagers that he would get them their land back. But while cynicism greets such promises in large parts of the developing world, farmers in Tanzania are now trying to hold their leaders accountable. Kapunga saw no progress on Magufuli’s assurance for a year after he came to power. Then, when his land minister visited the village, they reminded him, point blank and publicly. “After many years, we finally won the battle,” says Maria Jonas, a Kapunga farmer.

Theirs isn’t the only instance of communities getting the government to act. In Bagamoyo District 43 miles north of Dar es Salaam, local farmers regained 5,000 hectares of the village land in June 2016 from Swedish firm EcoEnergy after the government revoked the company’s land title. Tanzanian Prime Minister Kassim Majaliwa halted EcoEnergy’s $569 million bio-electricity project after concerns over a threat to protect fragile ecosystems and a nearby wildlife sanctuary.

And independent of the government, Loure, 46, has his eyes set on securing close to another 800,000 hectares of land for the Maasai and Hadzabe. Tanzania’s farmers and indigenous communities aren’t done staking a claim. The land was theirs, and they intend to get it back.