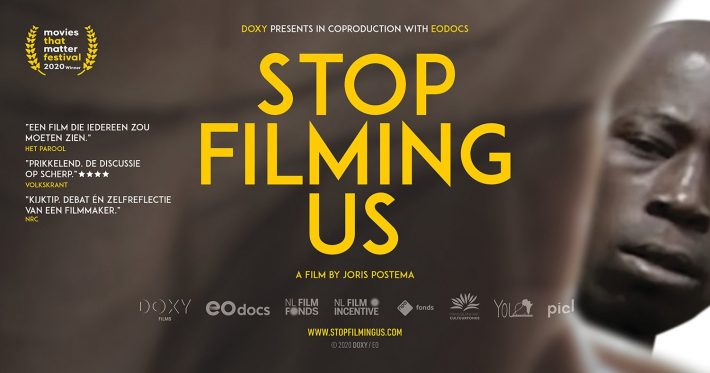 The documentary Stop Filming Us won the Dutch Movies Matter Award and received favourable reviews by the Dutch press. Unbelievable, according to postcolonial media scholar Emiel Martens. ‘Postema throws the discussion about the Western view of Congo at least ten years back in time’.

In Stop Filming Us (2020) Dutch filmmaker Joris Postema (47) goes to the city of Goma in the northeast of the Democratic Republic of Congo, where numerous violent conflicts and even more Western aid organizations have been in the past 25 years. It’s the third time in ten years time that he has traveled to Goma. The first time, in 2010, he was filming in the city on behalf of a Western aid organization, which forbade him from walking down the street or staying in an unguarded hotel – too dangerous.

The second time, a few years later, he was working with a local organization and was allowed to go wherever he wanted and sleep in a hotel without security. Where Goma first felt as ‘the most dangerous place on earth’, the second time Postema saw ‘a completely different city’. This conflict in his mind serves as the departure point of Stop Filming Us. An interesting departure point, but in its implementation Postema misses the mark more than once.