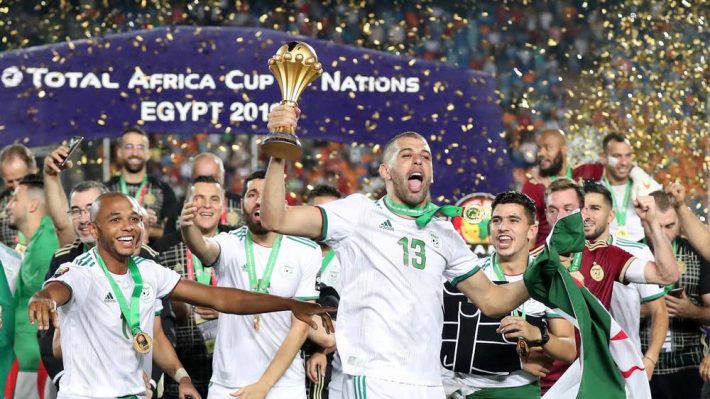 lgiers, Algeria – Football-crazed Algeria burst into a paroxysm of euphoria on Friday night as the country’s national team emerged triumphant at the Africa Cup of Nations final held in Egypt.

Firecrackers lit up the night sky and cries of joy filled the air in Algiers as soon as the final whistle blew in Cairo International Stadium, with jubilant crowds, many of them draped in Algerian flags,  taking to the streets of the capital to celebrate the 1-0 victory over Senegal.

In a country where half of the population is under 30 and was not yet born when Algeria‘s squad won its first African trophy back in 1990, the victory of coach Djamel Belmadi’s players – nicknamed the Desert Warriors or Desert Foxes – was a landmark moment.

“This goes beyond sport. It is a question of national pride,” Amina, a 24-year-old student, told Al Jazeera. 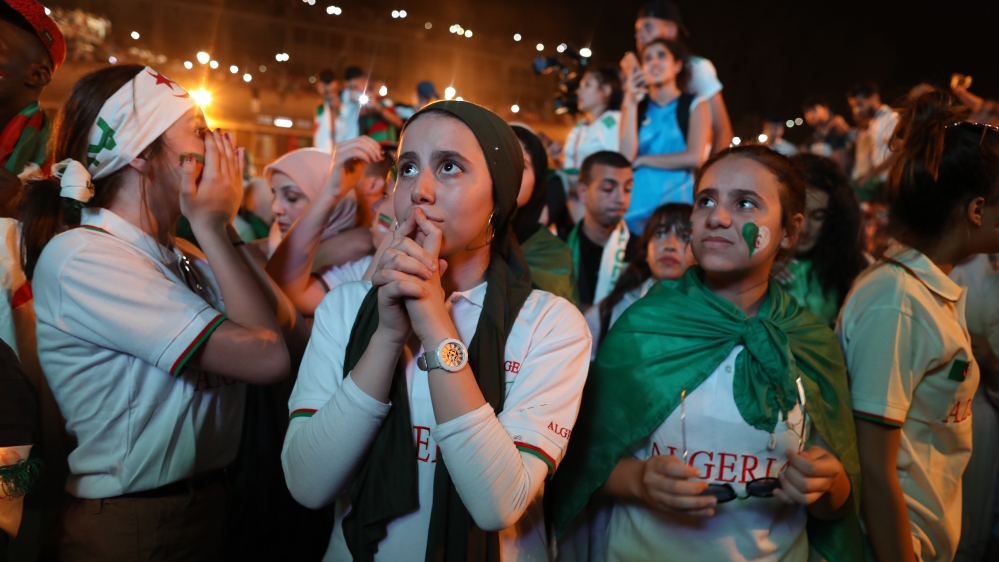 Moments earlier, a tense mood had settled in the homes, cafes and open-air screenings across the capital.

Baghdad Bounedjah’s early goal, timed at 79 seconds, had given Algeria the lead but until the final’s very last minute many  Algerian supporters, their eyes glued to the screen, were worried that the Senegalese players, who dominated the second half, could equalize.

The tension in the air dissipated when the final whistle sounded in Cairo.

“This was a stressful match. I probably lost three kilos just by cheering on our side,” Fodil, a 48-year-old shopkeeper in Debussy district, told Al Jazeera.

With his neighbours, Fodil had set up an outdoor screening, placing around 100 plastic chairs in front of a white sheet hung on street lights to broadcast the final.

“It was important to watch it together. It is a unique moment of unity,” said Fodil, who had attended the final with his father for 29 years to witness Algeria’s first win on home soil.

“Now, I am living this moment with my children,” he said. 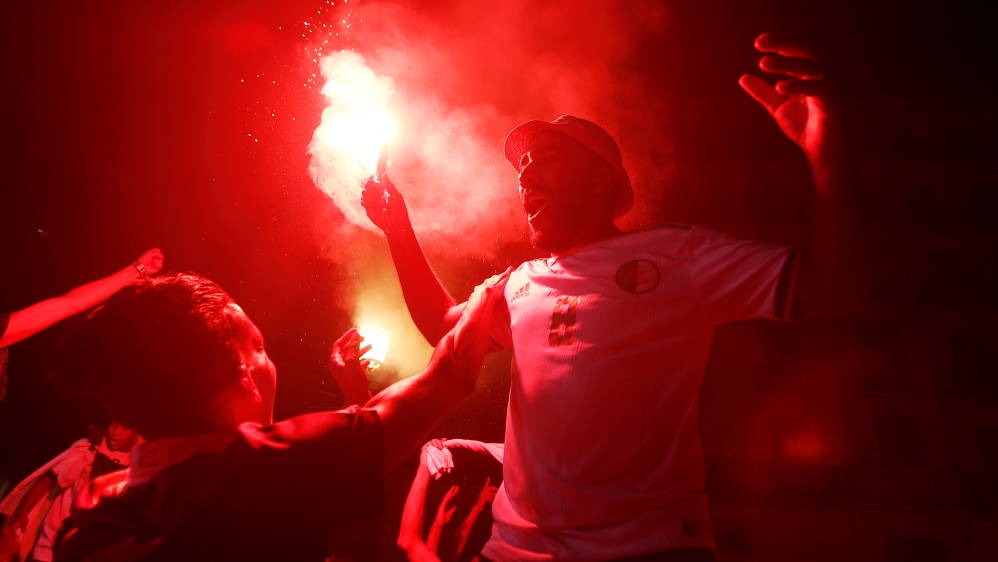 Many fans said the Algerian national football team played with a lot of heart, effort and solidarity [Ramzi Boudina/Reuters]

Similar small open-air screenings were improvised all over Algiers.

Hours before kick-off, tens of thousands of people gathered in Algiers’ July 5 Stadium, where the match was shown on giant screens.

Thousands of other fans chose to watch the game at Ouagnouni stadium, where all of the Africa Cup matches were broadcast on a big screen throughout the month-long competition.

Celebrations quickly spilled from houses and coffee shops into the streets as convoys of cars raucously converged downtown.

In the crowd joyfully chanting “Champion! Champion!”, few supporters had expected, before the tournament began, that Algeria’s captain Riyad Mahrez and his teammates would lift the trophy in Cairo.

“I had an unlimited trust in these talented players but their victory is quite surprising. I still don’t realise what they have achieved. Maybe tomorrow,” Ines, a 15-year-old French Algerian student visiting her parents’ native land, told Al Jazeera.

Many said they are proud of the Desert Warriors, who appeared as a combative squad playing with an abundance of heart, effort and solidarity.

“We deserve this victory because Algeria was the most impressive side of the tournament, leading the scorers,” Lyes, a 43 year-old lawyer, said.

“The Desert Warriors have played a beautiful football. Not only we have won the Africa Cup for the second time, but we have also come out with a strong and promising national team.”

The victory holds an extra significance in a country that has been faced with an unprecedented protest movement since February.

A few hours before the start of the match, tens of thousands of protesters rallied peacefully in Algiers for the 22nd week to demand a democratic change, defying a heavy police presence. Dozens of police vans were stationed near the Maurice Audin Square, blocking access to what has emerged as the protest movement’s hotspot in the capital.

“It is not a coincidence that the final of the African Cup took place on Friday, the date of Algeria’s weekly anti-regime demonstration,” Abdelslam, a 25-year-old shop owner, told Al Jazeera.

Next to him, his friend, Mehdi, a 28-year-old architect, drew a parallel between the Algerian football squad’s experience and the country’s ongoing political crisis.

“The same way Belmadi has built an invincible team, we will help to develop our country,” Mehdi told Al Jazeera.

Nearby, supporters were venting their indignation at the arrests of several demonstrators brandishing emblems of the ethnic Berber group and of Lakhdar Bouregaa, a veteran of Algeria’s independence war, shouting “Free Bouregaa”.

Like many of those celebrating, Mehdi considered Algeria’s football success as the “victory of the young generation”.

“The protest movement broke out thanks to the young people who were the first to stand against
[former President Abdelaziz] Bouteflika’s bid for a fifth term,” Mehdi said. “And these are young players who gave us our second African Cup.”

He added: “The youth has been underestimated for years in Algeria. But hopefully, this is changing.” 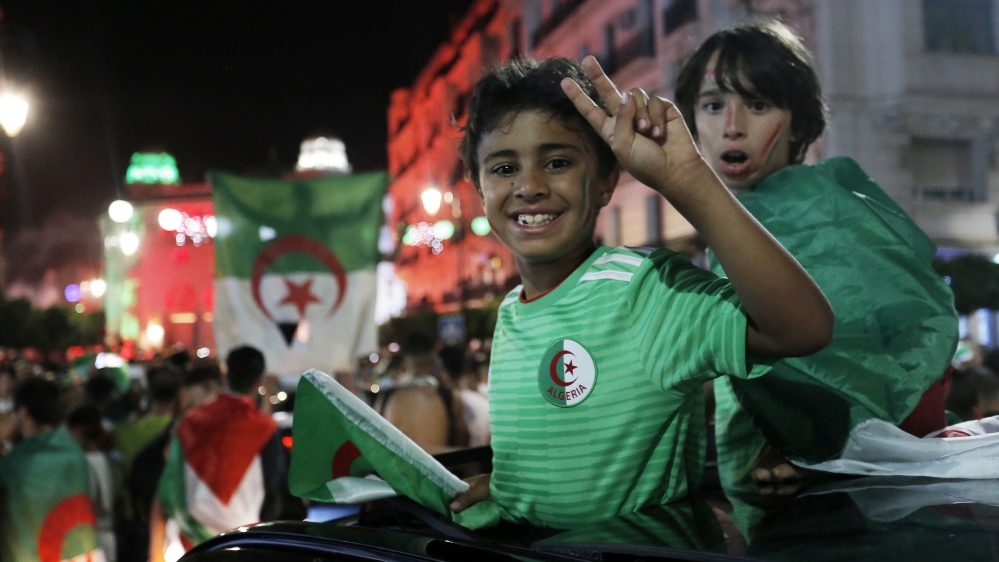