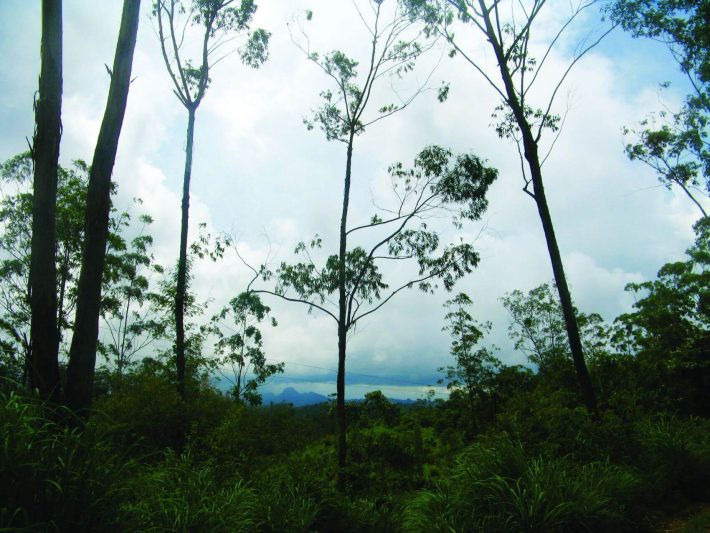 I remember once walking in the forest of Sheka, a district in the South West of Ethiopia, with the spiritual leader of the Ateso community, called Atestata. He is a tall man with a warm smile and an air of calmness around him. He was reading the forest to me, describing every little stream and lake that we were crossing and every big tree and forest patch that we were passing. Walking a little bit in front of me as if to assert his authority, he was saying, ‘Do you see this stream? It is sacred. We used to sacrifice a lamb to make sure that it continues to flow.’ A few steps later, ‘do you see that little lake? It is sacred and we have a ritual every other year to honour it and to thank our ancestors for keeping our land safe.’ He glances and points to a tall tree, ‘Do you see that tree? It is sacred and we keep it in our prayers when we pray to our God.’ When we reach a small hill, he points at a part of a forest which looked thicker. ‘Do you see that forest? It is sacred and nobody can even cut a grass from it, except putting their bee hives.’ Every stream, every pond and every patch of forest are sacred to him and the community.

At his home the same day, we ate traditional food called Kocho. It comes from a plant called Enset of which there are over 80 varieties in Sheka. These varieties are grown on different soil types, used for various purposes and planted at different seasons. A number of people were coming to his house while I was there. He is a spiritual leader/healer and people were getting treated for various illnesses. He uses mainly plants but sometimes parts of animals. I was told by one of the ladies who was part of the group that walked to his house that he once used his wedding ring to heal a kind of a wart on her left arm. It rains a lot in Sheka, eight months per year on average, and it becomes difficult to have major events including burial and wedding ceremonies during these seasons. Therefore, people come to him to stop the rain till the function is over and he does. He is respected as a guardian of the forest and a mediator of conflict and events by the local community. There are a group of elders called Gapitatos who act as his councillors with varying degree of authority and responsibility. They help him govern the relationship among the community and with the forest.

All indication points now that Atestata and his community are losing their biocultural diversity and their resilience soon.

Their challenges come in so many ways. To begin with there is a demand for land for agricultural investments leading trees cut for tea and coffee, plantation. As you drive a few kilometres in to the Zonal administration of Sheka, you would find to your left and right a huge tea plantation. The local community has started felling trees and planting coffee just at the back of the tea plantation and into the forests of Sheka. The famous Ethiopian athlete who has set 27 world records, Haile Gebresilasie, has invested in coffee and in spices and has cleared over 500 hectares of forest to do so. So one of the biggest threat for biocultural diversity is change in land use management which leads to degradation of forest, drainage of wetlands, pollution and habitat loss.

People seem to be copying investors and clearing large tracts of land individually or in groups. One of the reasons for this is loss of ownership of their land. People are not consulted when decisions are made for big agricultural investments and they lose their right to their honey production in the forest as well as to their sacred natural sites. They then develop an attitude that ‘if someone can come in the name of investment and take our land, why should we do not do the same?’ This ineffective state governance and loss of tenure security is the second part of the reason for the erosion of biocultural diversity.

The small town of Sheka called Masha was very small when I first visited it in 2005. Now it is rapidly urbanizing. This has a lot of impact on both the biodiversity and the culture of the people. Youth are attracted to urban areas where they lose the appreciation of their cultural knowledge and practices. Urban areas are also claiming rural land. They are also a gate to a lot of good and bad cultural practices. They open opportunities for livelihood, as is seen in increasing numbers of shops and coffee houses, but can also result in bad habits including theft and prostitution.  This is the third impact.

Atesata told me that his children are less interested in what he is doing and his knowledge. They give more value to their school education than to his knowledge. They also spend so much time in urban areas and have other values, money and media included, than their culture. Therefore, there is less opportunity for him to transmit his knowledge to his children. This is happening across the board. Local knowledge in Sheka is eroding. This acculturation is the fourth reason for erosion of biocultural diversity.

Biocultural diversity comprises the diversity of life in all of its manifestations: biological, cultural, and linguistic, which are interrelated (and possibly co-evolved) within a complex socio-ecological adaptive system. There are four key bridges interlinking nature with culture: beliefs and worldviews; livelihoods and practices; knowledge bases and languages; and norms and institutions.

Atestata and his communities’ reverence and respect for the components of the ecosystem and the various rituals that they conduct indicates their spiritual relationship with the forest. They do not see the forest only as a resource. The forest is sacred to them. This keeps the forest protected. The various cultural practices and rituals keep the community together and gives them cohesion. This is a good basis for their resilience in times of major shock such as drought and forest fire. Therefore, beliefs and worldviews are the first bridge.

The diversity in the food that they eat reflects the diversity in plant and animals that exist in their farms and the forest. They use the more than 80 species of Enset and a range of herbs as food. They also keep livestock. They use the forest as the source of medicine. As healer, Atestata uses the biodiversity in the forest to heal his community. This selection and usage of plants and animals results in the reworking of the cultural landscapes. This is the second expression of the intimate linkage between the culture of the community and their forest biodiversity.

The relationship of the people of Sheka is mediated through their knowledge and skills. They know which plant and animal to use for what purpose, where to find these resources, which particular season they get them, how to collect and processes them and what to do in times of shortage. This knowledge is critical for their survival and resilience. They also have traditional ways of communicating it to their next generation through livelihood practices, stories, songs, proverbs, etc. These cultural forms of communication are central to the existence of the community as a particular culture and is critical to their survival. Also central to this is the ability to adopt and make changes as both their social and ecological context changes. This shows the third linkage between their culture and the biodiversity around them.

In the case of the Sheka forest, distribution of land for agriculture, allocation of trees for hanging of beehives, marriage, mediation of conflict, etc. mostly involve the spiritual leaders in the community. The spiritual leaders derive their power and claim their authority from the custodianship that they have over these sacred natural sites. Atestata and his group of elders, Gapitatos, have a great role to play to manage the relationship among local communities as well as between their communities and their environment.

A deeper understanding of biocultural diversity as a context for learning and transformation is important for: development; for bringing local perspective to understand the local impacts of climate change; for understanding the services that people bring to the ecosystem; for explaining the role of biocultural knowledge and practice for adaptive governance; and for research into local level practices and change. Bringing in biocultural diversity allows for multiple views to be analysed using scientific tools.

What should be done to ensure the continuation of biocultural diversity?

In conclusion, biocultural knowledge and practices are critical for the survival and well-being of many communities in the world. As we live in an interconnected world, ensuring their rights will also ensure the well-being of the planet. The biocultural heritage that resides in the forests, meadows and agricultural lands of the world’s indigenous and local communities is very critical to the survival and well-being of human beings. We need to implement policies and practices to ensure its protection.