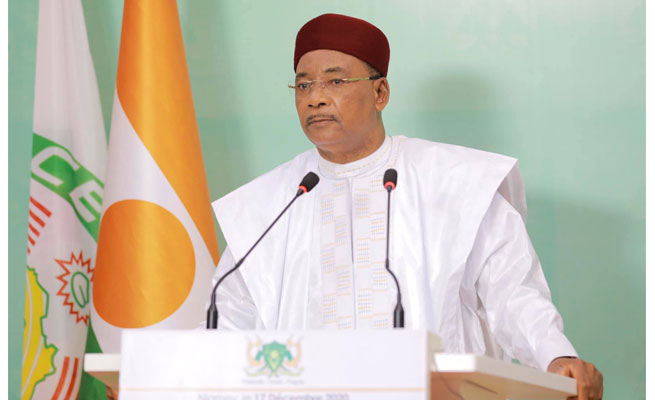 The 2020 Ibrahim Prize for Achievement in African Leadership has been awarded to Mahamadou Issoufou, president of Niger. He is the sixth recipient of the Ibrahim Prize, which recognises and celebrates excellence in African leadership.

In its citation, the Prize Committee praised President Issoufou’s exceptional leadership after inheriting one of the world’s poorest economies, facing seemingly insurmountable challenges. Throughout his time in office, he has fostered economic growth, shown unwavering commitment to regional stability and to the constitution, and championed African democracy.

Announcing the decision, Festus Mogae, Chair of the Prize Committee and former President of Botswana said:

In the face of the most severe political and economic issues, including violent extremism and increasing desertification, President Mahamadou Issoufou has led his people on a path of progress. Today, the number of Nigeriens living below the poverty line has fallen to 40%, from 48% a decade ago. While challenges remain, Issoufou has kept his promises to the Nigerien people and paved the way for a better future. After careful consideration, the Committee finds President Issoufou a worthy winner of the Ibrahim Prize.

President Issoufou was first democratically elected President in 2011, following many years of military rule in Niger. He was elected for a second term in 2016 and stepped down at the end of this mandate, demonstrating his clear respect for the constitution. Data from the 2020 Ibrahim Index of African Governance (IIAG) underline President Issoufou’s achievements. During his ten years as President, Niger has made progress in multiple areas, including improving in all four subcategories of Human Development. At the end of the decade, Niger ranked 28 out of 54 countries in the IIAG. It is among the ten most improved African countries in strengthening socioeconomic opportunities for women