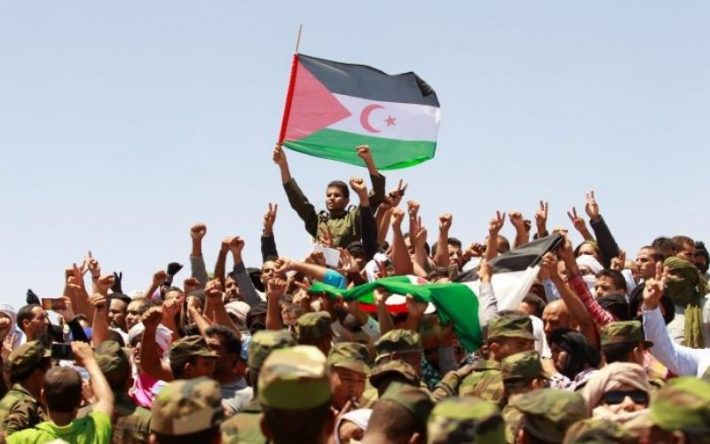 The Saharawi liberation movement, Polisario Front, declared resumption of legitimate armed struggle – its right to self-defence and use all legitimate meant to defend the Saharawi territory – against the Moroccan military invasion and the illegal occupation of huge parts of the Saharawi Republic (geographically more famous as Western Sahara).  The Polisario Front was left with no option after Morocco, once again, defiantly violated the ceasefire imposed since 1991, and after 30 years of the UN’s failure to organize a simple referendum on self-determination, for the people of Western Sahara.

Demonstration in Paris, in support of Western Sahara

Armed struggle in Western Sahara was ignited by Moroccan attempt to militarily target a group of around 50 Saharawi civilians who were organizing a peaceful sit-in since 20 October 2020.

The peaceful demonstrators were not only calling on the UN to assume its responsibility in organizing the referendum as promised since 1991 and to stop acting as the guardian of the occupation, but they were also protesting against the Moroccan persistent human rights violations and plunder of the natural resources in the occupied land.

The sit-in stopped Morocco from being able to conduct its trade, smuggle drugs and steal Saharawi natural resources (mainly fishing resources), which it did through its military wall to export towards West-African countries, with whom it has close relations.  After around 3 weeks of the peaceful demonstration, Moroccan Ministry of Foreign Affairs declared that its army would launch an operation to forcibly remove Saharawi demonstrators. In response, the Polisario Front officially wrote to the UN Security Council and Secretary General that Saharawi Army of Liberation will never allow anyone, civilian or military, to harm Saharawi civilians, and that any such act will prompt the end of the ceasefire and resumption of military confrontations.

Emboldened by its allies, as it always has been and especially France, the Moroccan army opened two new breaches in its illegal military wall and started an incursion on Friday 13 November 2020, aiming towards the civilians.  The Saharawi army responded immediately, after safely evacuating civilians.

As a consequence of this new military aggression and the bold disrespect of the ceasefire, the President of the Saharawi Arab Democratic Republic and Secretary General of Polisario Front decreed the end of the Saharawi commitment to the ceasefire agreement.  He also declared the Saharawi resumption of armed struggle as a legitimate means of resistance, whereby, all people under occupation and foreign attack and/or invasion have the right to use force to free their country.

Accordingly, the Saharawi Army of Liberation started to immediately implement the Presidential Decree. The in-depth military operations were launched using artillery and missiles targeting Morocco military bases, bunkers and advanced posts all along the Moroccan military wall in the main regions of Guerguarat, Ausserd, Hauza, Farcia and Mehbes.

In the occupied territories of the Saharawi Republic, and immediately after the declaration by Polisario Front of the resumption of armed struggle, Saharawi activists and population started open confrontations with occupying Moroccan authorities, organizing demonstrations in various cities and demanding “the withdrawal of the colonizers”.

Following the open confrontation, the occupying Moroccan authorities arrested dozens of Saharawi youth in the occupied El Aaiun city and continued the daily surveillance of houses of the many activists – Saharawi human rights defenders, media activists and journalists are among the main targets of the new oppression, including children arrested during demonstrations.

They promised us “Peace” but want us to pay the price alone!

The Saharawi people acknowledged Polisario’s decision to resume legitimate and revolutionary armed resistance with full support and gladness.  Hundreds of young men and women, including students, left their comfortable lives in Europe and elsewhere, and used all possible means to secure a trip back to their country, despite tough COVID-19 restrictions.  Thousands of youth declared to the Saharawi Ministry of defence their readiness to join the fight – they left their small businesses in the camps unattended, closed shop and abandoned everything.  The call for liberation seems stronger than all else.

An officer in Charge of Saharawi Youth External Relations (UJSARIO), Mr. Hamdi Omar Taubali, when asked confirmed that he has joined the fight and is now in charge of assisting to enlist and organise volunteers who want to join the Army.  “All of them!” he smiled proudly, “want to go now and immediately to the Front! But of course, the Saharawi Army of Liberation is a professional army with a huge experience in guerrilla and classical warfare, it will not allow this to happen. They must undergo a basic training, after that, and according to their abilities and to the needs of the struggle they will be deployed to serve their country in the best way possible.  But it is heart-warming to see young men who left everything they had in Europe, to voluntarily join the fight.”

Hamdi’s colleague, Ms. Darak Abdelfattah, also member of UJSARIO’s External Relations department, was even more radical.  She stated that she was born after the signature of the ceasefire “and the so-called peace”.  She said, “But as a young woman, I have seen no peace for my people for the past 30 years of this smokescreen. The UN and Morocco want us to pay the price of peace alone!”  Ms. Abdelfattah believes that the only party that profits from “this so-called peace is the occupying force, Morocco, which managed to massively exploit our resources protected by the UN Mission on the ground, MINURSO, which became a miserable mission for nothing!”

Morocco calls for allies to support its new aggression

During a radio talk, Ms. Mbarka Mehdi, a career radio presenter of the Saharawi National Radio, expressed regrets to see some countries supporting the Moroccan aggression.  “All dictatorships in the Arab world expressed support to the Moroccan new expansionist aggression against another small and peace-loving Arab nation. Saudi Arabia, Emirates, Kuwait, Qatar, Bahrain, Jordan to name only these countries, which is normal, because been member of the same club of dictatorships they usually stick together and protect each other.  But what is even worse is to see some African countries involved in this shameful colonialist attack,” she lamented.

Morocco, it should be recalled, secured membership in the African Union in 2017 after over 30 years of absenteeism and rejection of the African organisation. Lately though, we have seen how it has formed alliances with a few African countries, mainly: Comoros, Cote d’Ivoire, Gambia, Benin, Central African Republic, Burundi, Sao Tome, Djibouti, Burkina Faso, Guinea, Equatorial Guinea, Guinea Bissau, Eswatini, Zambia, Liberia, in addition to the United Arab Emirates.

“The Moroccan occupier feels a terrible lack of sovereignty and legitimacy and is seeking recognition to its colonial expansionism from countries and nations that normally know what colonialism, occupation and human and peoples’ rights violations means.  That’s the only thing that hurts, otherwise, this manoeuvre will change nothing in the legal status of the territory,” Mbarka says.

No voice above the voice of the people

The Saharawi revolution and Polisario Front leadership has always affirmed that there is no authority that can supress the power of the people.  The Saharawi people had already decided during the last General Congress of the liberation movement in December 2019 that Polisario needed to deeply and categorically review the Saharawi attitude and dealings with the UN, in terms of the settlement Plan.

The Congress directed the leadership to adopt all necessary and legitimate means to secure the liberation of the Saharawi occupied zones, even if there is a need to resume armed struggle as a legitimate right of all occupied people to fight off foreign invasion and aggression.

The return of the conflict in Western Sahara exposes the failure of the UN to implement its own laws and Charter, and the hesitating behaviour adopted by the AU and all other regional and international organisations and the serious threat it poses to international principles and laws.

It will be a shame if the so-called “international community” yet again abandons the people of Western Sahara to fight for freedom on their own.  In fact, to keep quiet now is to support the colonialists and allow it to impose its principle of “might makes right”, which for the last 3 decades has been trying to impose on many nations.

A serious rebirth of Pan-Africanism and international solidarity between the masses is highly needed. Not only concerning the conflict in Western Sahara, but about issues such as peace, respect of borders, development, education and real integration driven by real actions on the ground and not simple vague words and dreams without actual instruments for implementation.

History recounts, between 1975 and 1991, the Saharawi people taught the Moroccan invaders a hard lesson. It was an even bigger lesson for the international community when they were given 30 long years to implement their doctrine on decolonisation in which the UN shamefully failed to do so.  Now, the Saharawi are taking the matter of freedom in their own hands and are determined to deliver a last lesson to Morocco and all other colonialists, that “A united people will never be defeated! (El pueblo unido, jamás será vencido!)”