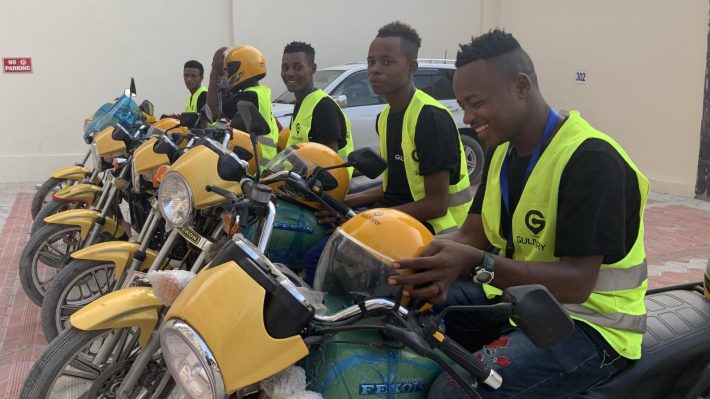 You can now hail a motorcycle service in the Somali capital, Mogadishu.

The Go! app launched in the Indian Ocean city today (May 1) promising affordable and convenient options in the city’s bustling transport sector. The e-hailing service is starting out with 20 motorcycles, allowing customers to order their rides online or hail them on the street after identifying the drivers with their yellow helmet and bikes.

The platform was launched by Gulivery, a delivery startup that provides third-party door-to-door services. The moto-taxi service makes the company the first in the Horn of Africa nation to venture into and digitize the motorcycle business. While Uber-style taxi apps like Waryaa Taxi and Dhaweeye have existed before, those firms only used cars.

The increase in digital transportation options comes as life in Mogadishu regains a semblance of normalcy after decades of war. That has led to increased traffic in the city. The city also has a fragmented transportation system, with three-wheeled motorized tuk-tuk and hundreds of dilapidated buses servicing a fast-growing population that currently stands at almost three million people.

Getting around African cities like Mogadishu and Nairobi can be demanding given the poor infrastructure, insufficient street addresses, the absence of reliable public transportation, and increasing urbanization that is fueling congestion. As such, motorcycle taxis, locally known as moto or boda bodas, have grown over the last few years.

Young entrepreneurs like Go! founder Deeq Mohamed says they want to capitalize on that, moving to bring order to the transit system and also create employment opportunities.

The idea for the app was in the works since last November but was finally implemented, Deeq adds, after his friend Najib almost missed his wedding in December. When the service was done, he told him, “maybe it’s time you start this moto-hailing service.”

The launch is the latest in a budding tech ecosystem in Somalia. The country opened its first tech hub in 2017, and e-commerce services have gained momentum. This has happened despite the fact internet penetration still remains low in Somalia, insecurity remains high, with the lack of a strong government and weak regulatory policies hampering the work of both small and big businesses.

Finance is also hard to come by, Deeq says. After taking a personal loan from a local bank, he raised the money for the bikes by crowd-funding from friends whom he expects to pay in the next two years. Deeq hopes to have 50-75 motorcycles on the road by the end of the year. If all goes well after that, “We would like to expand into other Somali cities and hopefully East Africa.”