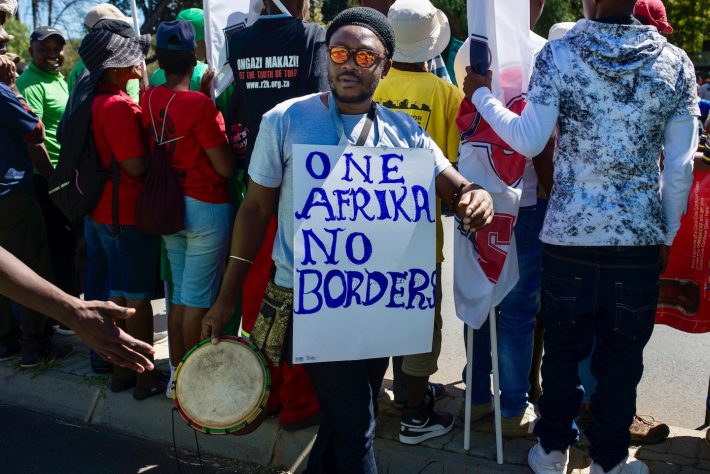 This is “dangerous”, he declares before narrowing down the area of interest to “Hillbrow and the surrounding areas”.

But the video, which has racked up views by the hundreds of thousands, is not new. Mkongi made the controversial remarks in July 2017 while visiting the Hillbrow police station to discuss his concerns over crime and illegal trade.

Despite this the video has been widely used to depict other situations, most recently in August 2019 following pitched battles between the police and street traders alleged to be foreign nationals in the Johannesburg CBD.

But does the claim by Mkongi stand up to closer scrutiny?

A few weeks after Mkongi’s comments, Johannesburg mayor Herman Mashaba, made a variation of this claim, saying that “as many as 80%” of the residents of Johannesburg’s inner city were undocumented foreigners.

Africa Check fact-checked the mayor’s claim in September 2017 and found it to be incorrect, with at least three sources of data contradicting it.

In response, the mayor’s office said that the statistic was from Mashaba’s “own experience” during raids of impaired or illegally occupied buildings in the inner city.

City currently does not have accurate numbers

Robinson Sathekge is head of the City of Johannesburg’s migrant help desk.  He told Africa Check that currently, the city does not have any accurate numbers or percentages as to the number of migrants in the city or Hillbrow specifically.

The help desk seeks to ensure that immigrants feel they are part of an inclusive city.

“The migrant help desk tried, without success, to tap into existing databases of the department of home affairs and only relies on the statistics produced through census by Statistics South Africa,” said Sathekge.

(Note: Africa Check has for weeks tried to get more details about documentation from the department. We will continue to do so.)

But only a census could yield such ward and suburb level data, Diego Iturralde, the head of demography at Stats SA told Africa Check.

Iturralde said that any claim about the make-up of a given neighbourhood “by any person is anecdotal and may or may not be true or may be temporal.”

The most recent national census was in 2011. This had data on the foreign-born population of the city.

None of the areas around Hillbrow shows an 80% foreign born population. (NOTE: Stats SA notesthat being “foreign-born” and “foreign-national” are not the same. For example a foreign-born person may have become a citizen at the time of the census, or one may have been born elsewhere but be a citizen by descent.)

The data agency added that while census data is widely used to estimate foreign-born residents, a shortcoming is that it takes place every 10 years, and major population changes may have since taken place. The next national count is set for 2021.

What do other data sources show?

We asked the Socio-Economic Rights Institute of South Africa on if they had data on this. They referred Africa Check to a recent presentation on the development and change of the Gauteng city-region over the last ten years. This was by Michael Sachs, an adjunct professor from the Southern Centre for Inequality Studies.

Sach’s work drew extensively from that of the Gauteng City Region Observatory, a partnership between the universities of Johannesburg and the Witwatersrand as well as the Gauteng provincial government.

Every two years, the city observatory through a quality of life survey collects data to inform the development of cities in the province. The survey randomly samples resident adults in Gauteng. It “can provide a rough estimate for the proportion of the adult population resident in an area who migrated from another country,” the researchers told Africa Check

The observatory shared its most recent quality of life survey, which is for 2017/18. Some 24,889 adult respondents were surveyed across all 529 wards of Gauteng. It showed that on average, “24.9% of respondents in wards in and around the Johannesburg inner city indicated that they migrated from another country.”The Gauteng partnership says the survey is not able to track undocumented foreigners in the province. “However, the survey is able to provide various insights into the lives of self-reported migrants.”

None of the reported percentages shows an 80% share. The available data does not support the claim by former deputy minister Mkongi.

A widely shared claim from 2017 by the former deputy police minister Bongani Mkongi that Johannesburg’s inner city is “80% foreign nationals” is unsubstantiated by the available data. More data and research on foreign born – or foreign nationals – would help provide a better picture of the city’s population.