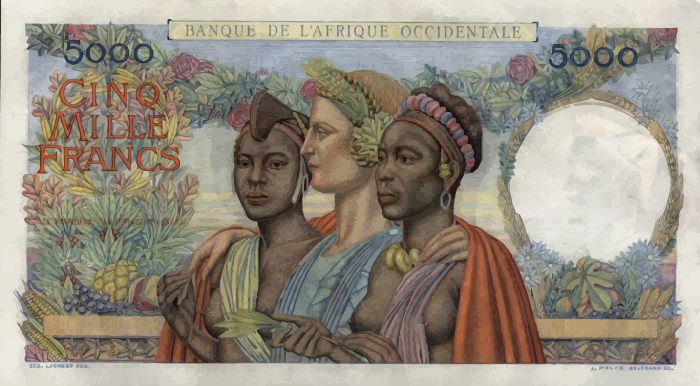 Just over 30 years after the idea was initially conceived, it appears that the whole of West Africa will now be adopting one currency. On the 29th of June 2019, the leaders of the 15 countries that make up the Economic community of West African states (ECOWAS) agreed to adopt the “Eco” as their new single currency. If all goes to plan, the existing national currencies of all of the countries in the region will be replaced by the Eco by as early as next year.

Perhaps the most significant effect of this new policy is that it will mark the end of the Franc CFA, the currency used by 8 of the 15 ECOWAS member states. The subject of many debates, protests and political speeches, the Franc CFA is seen by many as not just a relic of French colonialism in Africa, but a strategic tool used by the French government to maintain dominance over its former colonies.

To understand why the Franc CFA is such a blood boiling topic, one must look at its history.

In 1945, France, under the interim leadership of Charles de Gaulle established the CFA as the currency for all of its African colonies. The name CFA, stood for “Colonies Francaises d‘Afrique” which can be translated to English as “French Colonies of Africa”.

Following the decolonisation process of the 50s and 60s, the CFA zone reduced in size as Morocco, Algeria, Tunisia and Madagascar all developed their own national currencies. However, the newly independent western and central African French colonies retained the CFA as their currencies. Today, there are two CFA currencies still in use across Africa:

1. The west African CFA which stands for Communauté Financière d’Afrique(“Financial Community of Africa”) and is the currency of Benin, Burkina Faso, Guinea-Bissau, Ivory Coast, Mali, Niger, Senegal and Togo; and

The big scandal in all of this is that 50 years after the supposed independence of these countries, France still maintains control of the currencies of the 14 former colonies that make up the two CFA regions.

Like something from a weird and wacky conspiracy theory, France’s influence is so entrenched that even the CFA notes and coins are printed in France before being transported to countries where they will be used. The amount of CFA Francs in circulation, as well as exchange rate are both determined by the French finance minister. The CFA is also pegged to the Euro and in order to maintain parity with the Euro, the central banks of the members of the CFA Zones are required to deposit 50% of their currency reserves in the French Central Bank. The value of African reserve assets held in Paris were recently estimated at 20 billion US dollars — even worse, these deposits are subject to negative interest, meaning that African governments are actually paying for their money to be stored in France.

Quite understandably, many are outraged by the situation arguing that through this arrangement, France strangles the economies of the CFA countries by limiting the liquidity of their central banks, thereby blocking their access to investment capital.

The fact that CFA is pegged to the Euro means that when the Euro is strong, the CFA is also strong. This is very handy for the rich and powerful members of the African elite who enjoy frequent trips to Europe and own foreign properties; but for the local businesses who rely on exporting their goods to neighbouring countries with weaker currencies, a strong CFA is a major problem.

In periods of economic growth, African central banks are hindered from increasing the money supply to match economic growth predictions and so growing business struggle to access the funds they need to invest as banks simply do not have enough the cash to lend. According to Togolese economist Kako Nubupko, “there is a rationing of credit and so banks are very reluctant to lend to business. Even when they do, they lend in small amounts and at high interest rates”.

But why, despite all the apparent negatives, have African leaders not opted to simply leave the CFA zone after all these years?

According to some, the CFA is a key component the shadow neo-colonial system popularly known as “La Francafrique”. According to the proponents of this viewpoint, France actively works to keep in power those African leaders that serve French interests in Africa. Whether or not this is true is a topic for an another article.

The official justification for staying in this Franco-African monetary union is that idea that it assures monetary stability. Unlike the vast majority of other African currencies, the CFA is actually very stable due to the fact that it is pegged to the Euro. France’s restrictions on money-printing means that the CFA zones enjoys very low levels of Inflation when compared to other African countries in the region. By way of comparison, the inflation figures of Senegal and Ivory Coast for June 2019 were 2.1% and 1.2% respectively while in Nigeria and Ghana, those figures where 11.2% and 9.1% respectively.

With the emergence of the Eco however, it would appear that the leaders of French-speaking West Africa have finally decided that the need for independence trumps any perceived benefits of staying tied to France. For the romantics, the adoption of the Eco will be a fairy tale ending in which the villain that is France, will be defeated once and for all.

However, the reality might turn out to be quite different. Some have argued that by switching from the CFA to the Eco, Francophone West Africa will simply be handing over control from France to Nigeria.

You see as of 2019, the Nigeria represents 2/3rds of the GDP of the entire ECOWAS region and is also home to about half of its entire population. Consequently, some have argued that there is a serious risk that the new Eco-zone might end up being dominated by Nigeria in a manner similar to how the Eurozone is dominated by Germany.

But perhaps the rewards are worth the risk. By choosing to put adopt the same currency, the ECOWAS member states anticipate that they will be able to boost inter-regional trade between member states. The hope is that the new currency could help to double and perhaps even triple inter-state trade from the current total of 10% to a more impressive 20%-30% over the next decade.

In any case, a full 2020 roll-out of the Eco is not necessarily set in stone. As a safety mechanism, the ECOWAS members states identified 3 criteria that must be satisfied before the Eco can be adopted:

3. Foreign reserves that can cover over 3 month worth of imports.

The pink elephant in the room is that as of 2019, no one member state has managed to satisfy all 3 of the agreed criteria. But will the situation be different by this time next year? I guess we’ll just have to wait and see