Skip to content
Latest news
The dangers of NGO-isation of women’s rights in Africa
Greenlight Planet & Rural Ethiopia’s Energy Sector Transformation
Nigeria Is Not Rice Self-Sufficient Yet, Says Africa Rice Centre
Displacement and Dispossession in Tanzania: How “Conservation” is Destroying the Maasai
Access to and quality of education: How is Africa progressing?
Culture & LifeEditors ChoiceIn The News 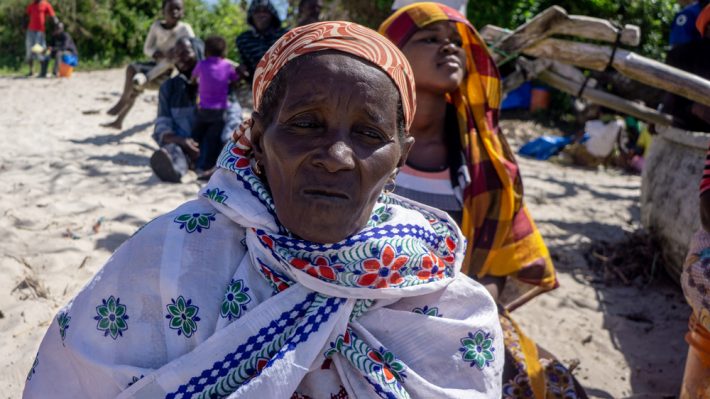 Guludo/Ibo, Mozambique – Piles of debris lie where thatched mud huts once stood in the village of Guludo in northern Mozambique. Broken pieces of furniture and muddied books litter the landscape and many like Asma Mushillah, 53, spend their days trying to salvage what they can from the rubble.

In an ordinary year, the villagers would be observing the Muslim holy month of Ramadan, fasting from sunrise to sunset and praying, but this year, life seems extraordinarily difficult.

Many are trying to rebuild their lives nearly a month since Cyclone Kenneth ripped through the northern coast, where the majority of Mozambique’s Muslims live.

The country’s central region was still reeling from Cyclone Idai that made landfall over two days in mid-March causing devastation across three Southern African countries, killing over 1,000 people.

Then on April 25, Cyclone Kenneth hit the already water-logged country killing an estimated 45 people affecting 375,000 people who remain in need of emergency assistance, according to the UN.

Mushillah says her observance of the Ramadan fast has been irregular because of the storms.

‘I should be fasting’

They washed away her food supplies along with her home, that she hopes to rebuild with a tarpaulin roof.

“The wind and the rain were too strong for my house, I lost everything. I found a few pots after the flooding, but I don’t have a house. My sons can help me to rebuild, but after that, we will still need food.

“I should be fasting, but I can’t do it very well. It’s a fast without order, some days I eat because I don’t know when next I will get food. I’ll fast properly if we get more food aid, then I will know I have something,” she said.

Many Muslims in this fishing village of about 2,500 inhabitants have had their holy month disrupted. Cyclone Kenneth, with wind speeds of over 200 km/hour, demolished the local mosque leaving them with nowhere to gather for worship or for the evening meal that breaks the fast.

Muzasufar Abakari, 45, the chief of Guludo, told Al Jazeera the walls of the mosque had collapsed.

“The mosque is damaged so there are no prayers, there is no call for prayers and there is no place to come together.

“At this moment people are scattered, they live in different places so they pray separately, but with time we will organise ourselves and find an open place to pray,” he explained. 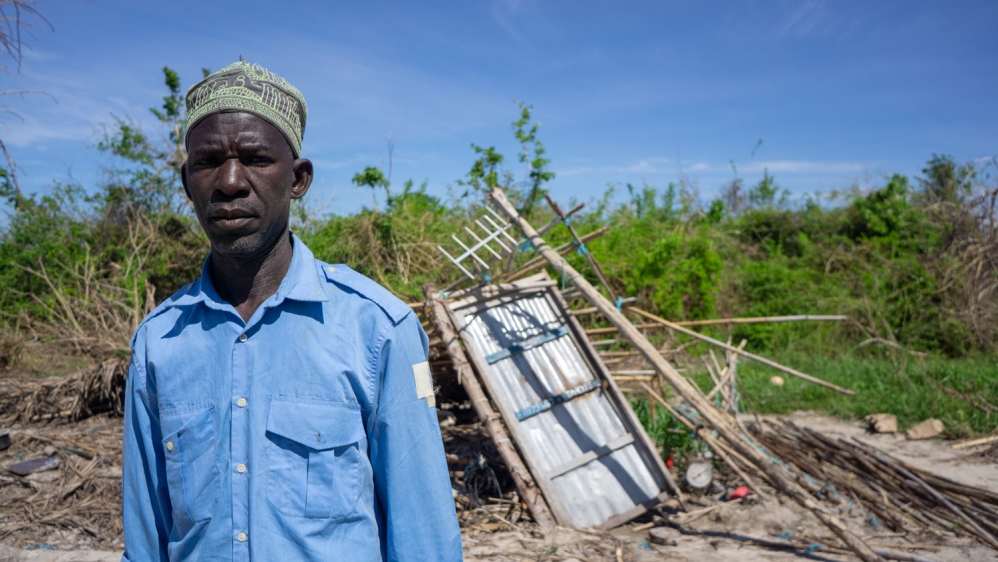 About 50 kilometres south of Guludo is Ibo island, a former base for Arabic traders who introduced Islam to the native population of the Quirimbas archipelago as early as 600 AD. The island’s mosques and the religious school were also partially destroyed by Cyclone Kenneth.

Mahando Amad, 66, has been the Muslim leader of Ibo’s main mosque for 15 years, but even he doesn’t always manage to attend all of the five daily prayers.

“It’s the month of Ramadan and it’s an obligation to attend prayers especially on the holy day [Friday], but now people are facing a very difficult time so it’s understandable that not many people come for prayers. Some come whenever they feel free, but many are so busy with trying to normalise their lives after they lost everything in the cyclone,” he said.

With the island’s electricity supply damaged, Ahmad uses a megaphone for the call to prayer, but his voice can only be heard for a few blocks.

A handful of men and very few women regularly attend prayers in the mosque where the old roof has been badly damaged.

In previous years the meal would be shared with poorer members of the community, Amad says this Ramadan there is no communal meal. Instead, worshippers come for sunset prayer with small lunchboxes of food to break the fast with others.

In the neighbourhood of Kumwamba, more than 500 homes were destroyed, according to local official Rahba Amad, and large parts of the local mosque’s ceiling were also damaged.

Ibo’s Imam would like aid from the Islamic Council of Mozambique to help repair the places of worship.

“I’m hopeful we will get some assistance from the Islamic Council. They normally send us food to assist others during Ramadan and I’m sure they will help to restore the buildings, but right now communication is impossible because there is no [phone] network on Ibo,” Ahmad explained.

Technicians from Telecoms Sans Frontiers, are currently working to restore communications on the hard-hit island and food-aid relief agencies continue to try to reach affected communities by air.

The UN’s World Food Programme (WFP) said it has delivered food aid to over 100,000 affected people in northern Mozambique. 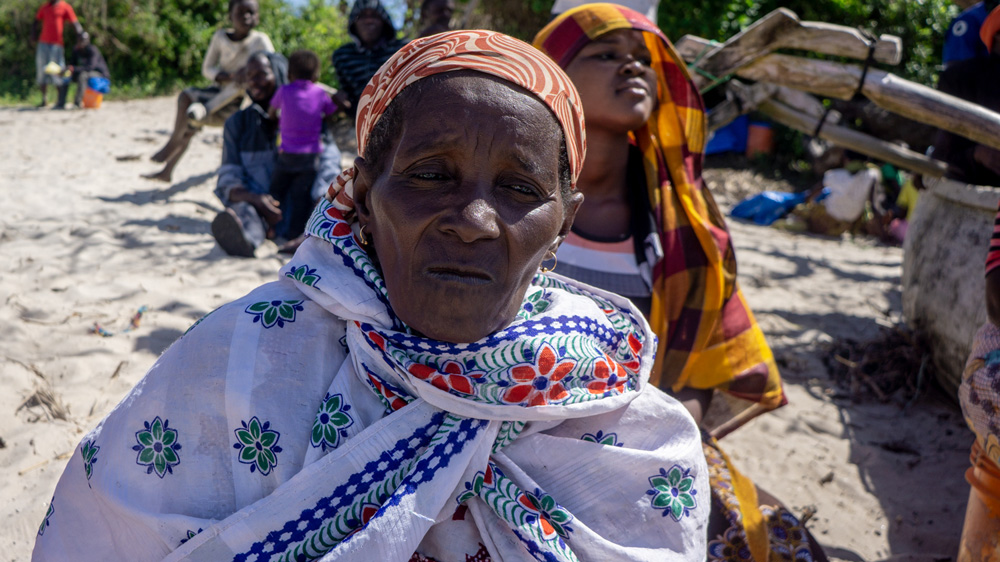 ‘I put my faith in Allah during this time, it is a time of struggle but it is also a special time for prayer,’  says Sifa Drisa who continues to fast during Ramadan [Tendai Marima/Al Jazeera]

But back on Mozambique’s mainland coast in Guludo, which falls under Ibo district, Sifa Drisa, 67, does not have much food left in her home.

Drisa says she and her grandchildren break their fast with a small bland meal of rice and fish, but Drisa fears the bag of rice she recently received as emergency aid relief will not last long with seven mouths to feed.

The family had planted cassava, but the cyclone ruined most of the crop.

Over 32,000 hectares of food in the area was destroyed by Cyclone Kenneth right before the main harvest leaving many families without much to eat.

Lisa Ratcliffe, the communications representative of the Food and Agriculture Organization (FAO), said the UN agency is carrying out assessments in parts of the northern Cabo Delgado province and the islands in order to map out a way to help farmers and fishermen who suffered losses.

“FAO’s expert technical teams are assessing needs, not only for agriculture but also livestock and fisheries, both of which also suffered extensive damage and losses from the [two] cyclones and as such to livelihoods and food security across the region,” she told Al Jazeera an email.

While aid slowly trickles into the worst-hit areas, Drisa says she still has faith that despite the challenges she faces, she and her grandchildren will be delivered from the hard times.

“I put my faith in Allah during this time, it is a time of struggle but it is also a special time for prayer. Though we have nothing in our house, I need to keep strong in my faith so that things will be all right in the end,” she told Al Jazeera.