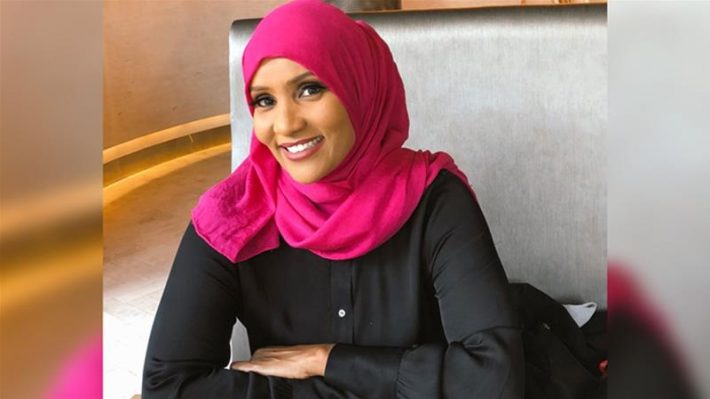 “Passionate”, “brave” and “a shining star who was a force for good” – these were just some of the tributes that poured in for Canadian-Somali journalist Hodan Nalayeh, who died on Friday during a 14-hour hotel siege in Somalia’s port city of Kismayo.

The 43-year-old, who was pregnant, was killed in an al-Shabab-claimed attack along with her husband, Farid Jama Suleiman, a year after she moved to Somalia from Canada with a mission to showcase the east African country’s rich culture and natural beauty.

As the founder of Integration TV, Nalayeh used the hashtags #SomaliaSuccess and #SomaliPositivity to post videos on YouTube of Somali youth and female entrepreneurs, as well as share pictures on Twitter of her travels in the country, including the fishermen of southern Ilisi Island and camel herders in Las Anod, the northern city where she was born.

On Monday, she uploaded photographs of the setting sun in Kismayo, saying: “People save all of their lives to have a retirement by the beach, yet, we have plenty of it and cannot see its value. Let’s appreciate the beautiful blessings we have.”

At least 26 people were killed and 56 others wounded in Friday’s attack on Kismayo’s Asasey Hotel.

In a Facebook post confirming her death, Nalayeh’s family wrote: “She spent her life devoted to serving the Somali people and reporting on positive, uplifting stories … She brought inspiration and hope to the Somali people through storytelling.”

She was expecting her third child at the time of her death.

Canadian Prime Minister Justin Trudeau condemned the “heinous attack” and offered condolences to Nalayeh’s family and friends in a statement on Sunday.

“Ms Nalayeh’s work showcased positive, uplifting, and inspiring Somali stories and was testament to the role of the free press in broadening people’s perspectives and defending diversity and inclusion,” he said. “Her loss is deeply felt in Canada, and in Somali and journalistic communities around the world.”

Ahmed Husen, Canada’s minister of immigration, refugees and citizenship, mourned Nalayeh’s death in a Twitter post, saying: “Through her work as a journalist, Hodan highlighted the community’s positive stories and contributions in Canada. She became a voice for many.”

Twitter user, Yasmin, wrote: “I don’t know a single Somali who didn’t fall back in love with Somalia through Hodan Nalayeh’s broadcasts. She bravely shared important stories about Somalia and its diaspora, everyone knows someone killed by al-Shabab.”

‘Stories that uplift the spirit’

Born in 1976, Nalayeh moved to Canada’s Alberta province at the age of seven with her family. Her father, a former governor, took a job as a parking attendant, she had toldToronto.com in a 2014 interview.

Following an early career in sales and business, Nalayeh went back to school to study broadcast journalism and fulfil her childhood dream of becoming a TV host, she told the Meaningful Work, Meaningful Life podcast in June.

In 2014, she became the first of her 12 siblings to return to Somalia for a documentary about the country’s capital, Mogadishu. There, looking over a city devastated by war, she said she felt like the “country needed her”.

“I looked over at this city destroyed by war. And I kept looking at it, and I was thinking to myself, my God, look at this destruction, but yet there is so much beauty,” she told host Francine Beleyi. “And I felt that was what had happened to me growing up. Because of lack of identity, because of who you are, because of where you grow up, you become this destruction, you are forced to become something you are not.”

In Somalia, “nobody looked at me like I was strange, nobody cared that I had a darker complexion, that I was different from them, they were welcoming me,” she said. “And we never had that belonging in the diaspora.”

Soon afterwards, she launched Integration TV on YouTube to tell “positive stories” of Somalis to inspire those in the diaspora struggling with a lack of identity.

She added: “Social media has changed the game for how people learn about culture. If we don’t become the creators of our own content, we are going to be at the mercy of people telling stories about Africa.”

The platform has more than 65,000 subscribers on YouTube and its videos have racked up hundreds of thousands of views.

Her latest series was about five things to do in Las Anod, where one episode shows her getting kicked out of an all-male tea shop. “Well, that didn’t go well, but whatever,” she said of the incident.

It also showed her family, many of whom had returned to the region for the first time in 35 years, drinking camel milk and helping build a school in the town.

“If I pass away, I want people to remember my YouTube channel and Google the videos that brought them joy about the country where all we’ve known was war … the culture here is really beautiful,” she told the Meaningful Work, Meaningful Life podcast.

Here are some of the tributes to Nalayeh on Twitter:

BREAKING: Inspirational TV personality who returned from Canada to report positive stories about Somalia, Hodan Nalayeh, killed in Al-Shabaab complex attack in Kismayo – Minister @JustAwHirsi confirms. Hodan was the founder of @IntegrationTV that reports on local and diaspora. pic.twitter.com/cjRQ2TPflg

Tough anchoring tonight after hearing the tragic death of an incredible woman. Hodan Nalayeh was a passionate journalist, beautiful human & mom. She was killed along with with her husband in an apparent hotel suicide bombing. Her tweet from a week ago below. Heartbreaking. https://t.co/okhbMz7pvG

This is heartbreaking. Hodan was a model for possibility in the Rexdale community, and one of the kindest people I’ve ever met. She used to tell me that whenever I got tired of the BS in this city, to put my family on a plane and go see East Africa.

So saddened to hear about the death of Hodan Nalayeh in yesterday’s gun attacks in Somalia. Africa, and the world, has lost a shining star who was a force for good. Rest in Power Hodan. My heart goes out to her 2 young sons. https://t.co/ppD7Z37pBY pic.twitter.com/3FfHjMpnoj

“Our stories that are not just about suffering are valid and should be told more often.”

Earlier this year, we honored her during #Okay100Women for her work across the continent, mainly for showcasing the youth culture in #Somalia: https://t.co/qru6iGWSSD pic.twitter.com/QYOBilVaah