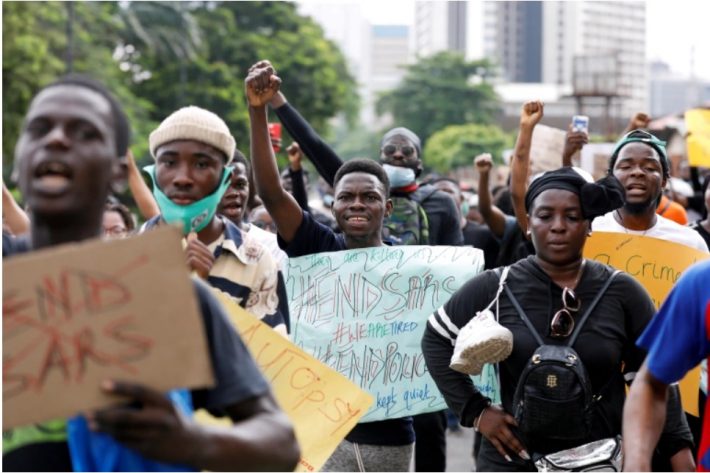 Those in Nigeria’s halls of power must have been flummoxed when protests erupted in response to Inspector General of Police Mohammed Adamu’s October 11 announcement that the Special Anti-Robbery Squad (SARS) would be disbanded. They had made the fatal error of thinking that the #EndSARS demonstrations were just about the police unit and suspending it would take care of the problem.

But the Nigerian youth know better. This was the fifth time in as many years that this thorny unit had been “reformed” or “disbanded” and it is abundantly clear that the government is not serious about tackling police violence. The scepticism of protestors proved justified, as on October 13 Adamu announced the creation of a new unit – Special Weapons and Tactics (SWAT) – to replace SARS.

By now, to anyone clued into Nigerian politics, two things are clear. First, the frustrations expressed in the streets of Nigerian cities, from Lagos to Port Harcourt to Abuja, are about far more than the crimes of a police unit. Second, Nigerian youth are rediscovering their power, picking up the mantle of the cultural and political resistance that in the past helped snatch the country back from the jaws of military dictatorship.

The SARS unit has come to embody some far deeper fissures in Nigerian society. Formed in 1992 to combat a wave of armed robberies and kidnappings, SARS was initially not a visible presence in Nigeria: its officers operated in the background without uniforms to catch violent criminals by surprise. The unit rapidly expanded in 2009 as the government sought to take on the rising tide of fraud and cultism on university campuses. But instead, it became the centre of consistent scandal, as officers indiscriminately used harassment and extortion against Nigeria’s young people.