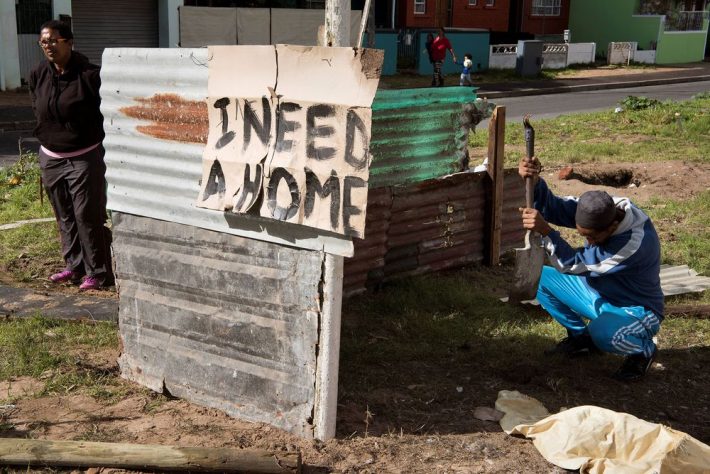 When President Cyril Ramaphosa announced the 21-day national lockdown, he said: “From midnight on Thursday March 26 until midnight on Thursday April 16, all South Africans will have to stay at home.” But for nearly 200000 people, this order is impossible to comply with. That’s the estimated size of South Africa’s homeless population. They live on this country’s streets, in its parks and under its bridges — and most have nowhere else they can go.

Only four days separated the announcement of the lockdown and it coming into force. In that time, a chaotic coalition of provincial and local governments, nongovernmental organisations (NGOs) and faith-based institutions worked tirelessly to figure out where to accommodate all these people — and how to feed them, clothe them, keep them warm, keep them healthy, wean them off any dependencies such as drugs, alcohol and tobacco, and keep them from going crazy from the cabin fever, isolation and loss of independence that is affecting us all. In Tshwane, 43-year-old Euston Dlamini had no idea what he was going to do for the duration of the lockdown until just hours before it began. That Thursday evening, he was settling down for the night with a blanket in Burgers Park when some policemen approached him. “The police officers said I’m not allowed to sleep on the street any more; I must go to that stadium,” he said.

The Caledonian Stadium in Pretoria was designated as the main reception point for the city’s estimated 8000 homeless people. Last Thursday, hundreds of people who were living on the street were told to go there, or moved there by force. This was Tshwane’s temporary solution to the homelessness problem and, by all accounts, it was a disaster.“Very bad. Health hazard. Filthy, dirty. It was very crowded. All the tents were occupied. Maybe 30 people in a 4m2 tent. Food — sometimes you get two slices of bread. Sometimes you don’t get, because there are plenty of people,” said Dlamini.It was also dangerous. The Mail & Guardian spoke to one man inside the stadium who had been robbed of all his possessions. “They have nyaope boys here — they come to us in the night to attack us. They took our phones. And our blankets,” he said.

A senior NGO worker echoed these complaints. He asked not to be named to preserve his NGO’s working relationship with the government. “It was totally overrun: thousands of vulnerable people, mainly migrants, a lot of them drug users. Men, women, children all together … Social distancing is the least of everyone’s concerns.” Five days later, the situation had improved somewhat. Regular food was being served. A makeshift clinic had been set up, which was prescribing methadone to nyaope users to help manage their comedown. And between them, the City of Tshwane, the departments of health and social development and the Tshwane Homelessness Forum and affiliated NGOs had managed to find temporary shelters for more than 400 people, including Euston Dlamini.

“This is much better here,” he said, while sitting on a brand-new mattress in the Arcadia Dutch Reformed Church, just a street away from the the Union Buildings. Because of physical distancing concerns, there is space for just 20 elderly men in the church hall. Each is provided with a mattress, a blanket, multi-vitamins and soap. The church will make sure they get three meals a day, and are in regular contact with their families. “It looks like we are correcting a lot of the mistakes we made early on,” said Sasha Lalla, who works with the Tshwane-based Community Oriented Substance Use Programme (Cosup). He has barely slept since the lockdown began. “My one wish is it lasts well beyond April 16. I hope this encourages not just government but all sectors to take the homelessness issue seriously.”

Things went more smoothly in Durban, where a remarkable joint effort between the eThekwini Municipality and a forum of NGOs working with homeless people has managed to screen 2000 street people and accommodate 1700 of them at a dozen temporary camps set up around the city. They were first screened at a reception centre at the Durban Exhibition Centre for Covid-19 and other health issues, including HIV and TB, before being sent to the camps, which have been funded and provided with toilets and showers by the municipality. The sites include tented camps on municipal parks and other land in North Beach, Albert Park and the Moses Mabhida Stadium outfield. Disabled or sick men are being housed at the Denis Hurley Centre, which runs ongoing support programmes for homeless people.

More than 220 disabled or ill women are under lockdown in a building that had been refurbished by the city for use as a women’s shelter, but had not been previously put into use because of delays caused by red tape. “It is fascinating watching what can happen when civil society and government work together,” said Raymond Perrier, the co-ordinator of the National Homeless Network in Durban. “We have achieved more for the homeless in six days than we have in the past five years.” While the city provides the infrastructure for the 1700 people, meals are provided by faith-based organisations. Breakfasts consist of porridge, with residents receiving a cooked lunch and a snack in the evenings. “The Christians provide breakfast, the Hindus lunch and the Muslims dinner. The Jews provide the refreshments. We didn’t plan it that way, but this is how things worked themselves out,’’ said Perrier.

People living near the camps were also providing additional food, with one North Beach couple turning up at the tented camp with chicken and chips for 150 people. Independent Newspapers is providing the sites with free copies of Isolezwe and The Daily News, and East Coast Radio is providing equipment so it can broadcast to the camps. People in the camps who had substance addictions were being screened by a team of specialist counsellors and doctors who were providing them with palliative care. Those people who had undergone severe withdrawals are being hospitalised, and substitute therapy for the longer term is still being considered.

It has not worked out well for everyone. When the M&G visited Tshwane on Tuesday, there were at least 500 people still in the Caledonian Stadium, waiting to be assigned to a shelter. Thousands of others have either escaped the stadium or totally evaded the attention of the police. More shelters are not that easy to find. “The one thing that we would like to stress is that buildings like that are sitting empty,” said Cosup’s Lalla, pointing to a student residence. “Student accommodation [is] sitting empty. It would be the ideal situation … We are trying to tap into hotels that might be empty at this stage. We are even looking at parking lots.” But building managers, hotel owners and even schools are proving reluctant to co-operate. “One reason why a lot of possible shelters pulled out is they wanted to know what would happen once the lockdown was over. How are you going to remove homeless people — are they going to be involved in endless litigation?” Lalla explained.

A source within the City of Tshwane said that they have been very disappointed by the failure of schools and businesses to contribute during this crisis. For Thapelo, the prospect of a shelter seems far away. He has been stuck in the Caledonian Stadium since the lockdown began. He tried to escape, but metro police brought him back — and beat him in the process, he claims. The 29-year-old does not want to give his full name for fear of police retribution. “We are just staying here for no reason. And people here are sick — they are very sick. Obviously we are going to make one another sick.”

Thapelo usually makes a living by asking motorists for money at a set of traffic lights in Tshwane. But his life has been upended by the lockdown.

“Ramaphosa is very useless for a shutdown. No one expected the world to just stop like that,” he said. “Even him, he’s a human being. A human being needs exercise. Even him, I see him go past in his cars. Even yesterday, he passed here. Even him — he must stay at home.”